You are at:Home»Current in Carmel»Carmel Community»Carmel Clay Schools superintendent looks to the future at OneZone luncheon

Wahl joined Hamilton Southeastern Supt. Allen Bourff in giving a state of their schools Sept. 13 at a OneZone luncheon at 502 East Event Centre in Carmel. 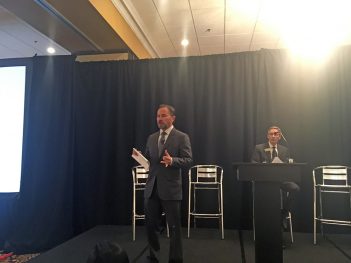 “When we meet with our (state) legislators, we talk about keeping our best and brightest in Indiana,” said Wahl, who became CCS superintendent in 2013. “It’s a continued challenge. We want to make sure in our public schools we want to do what we can to get our best and brightest to stay in in Indiana. Sixty-five percent of today’s children will be in careers that don’t even exist today. We want to give them the skill sets so they can matriculate in whatever that career may be, even if that career doesn’t exist today. The skill set is key. Today’s students will get 10 to 14 jobs by age 38.”

Wahl used an example of a Carmel Clay Schools employee being at the same job for 34 years.

“Those days in the workplace are not ahead of them,” said Wahl, referring to today’s students. “So they need to not only have the skill set, but they need to have the flexibility and the personal skills to adjust to the job market.”

“We talk about student learning and operations and how we organize the environment,” Wahl said. “We’ve looked at the organization of our middle school since I’ve been there. This year we are looking at elementary structure and the high school structure. We’re looking at flexible scheduling options to get our students prepared for the next step. We look at a growth mindset.”

“We’re proud of our scores, but those are a static test in time,” Wahl said. “We look at growth. Our measure is how the students are doing when they walk into our classroom, how they are doing in the mid-year and how are they doing at the end of the year. We have a growth mindset we think mirrors the workplace.”

There are more than 150 student-generated clubs for high school students.

“If students at the secondary level are engaged in one meaningful activity outside the classroom, their student achievement level goes up,” Wahl said. “At Carmel, there is an amazing amount of opportunity for kids to follow their passion.”