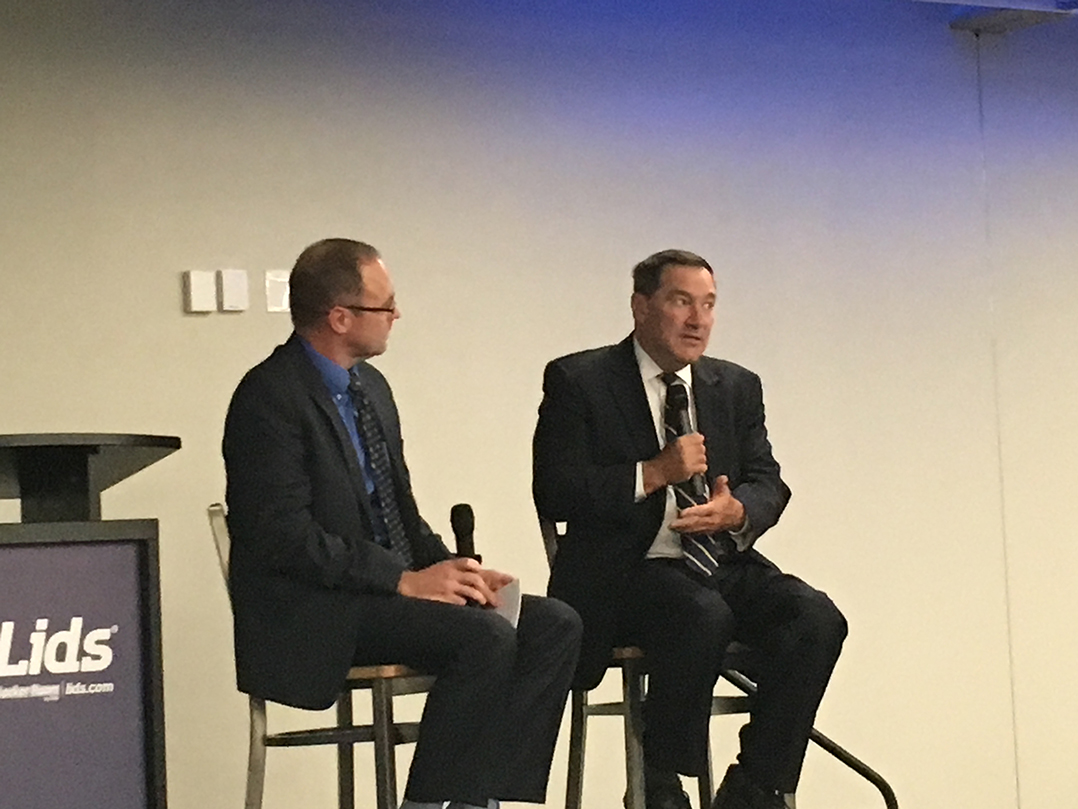 In 2015, Indiana Sen. Joe Donnelly was ranked as the second-most bipartisan senator in 2015 by The Lugar Center.

“Sen. Susan Collins (Republican from Maine) constantly reminds me she was first,” said Donnelly, a Democrat.

Donnelly’s willingness to cross party lines was likely a factor in earning a 2017 Spirit of Enterprise Award from the U.S. Chamber of Commerce in recognition of his support for economic growth for Indiana workers and businesses. Donnelly was presented the award at the Zionsville Chamber of Commerce luncheon Sept. 11 at Lids headquarters in Zionsville. Donnelly addressed a number of issues and took questions from the audience. Zionsville Community High School teacher Dave Rodgers served as moderator.

Donnelly was asked about President Donald Trump’s actions to cut back many regulations on business.

“We have a lot of regulations that are good and a lot that are overbearing, so you try to look at them and say what actually makes sense and contributes to success,” Donnelly said. “We protect those things precious to us in a common sense way while making life for small business as simple as possible.”

Donnelly said the Senate’s job is to put stable policy in place.

One of the biggest issues Indiana and the nation faces is dealing with the opioid crisis, Donnelly said.

“We’re trying to figure out how to stop it,” Donnelly said. “They’re coming in unmarked packages. The sniffer dogs, if the dog gets it in their mucus, it kills them. Everybody’s all in. The goal is to cut it off at the start.”

Donnelly is a member of the Armed Forces Committee and the ranking Democrat on the Strategic Forces Subcommittee, which deals with North Korea, missile defense and nuclear weapons.

“It’s a big challenge we have in front of us, because it’s hard to come to rational decisions and conclusions with a leader in North Korea who struggles with his rational decision-making,” Donnelly said. “We look at it and it makes no sense to us, but in his world view and what he’s dealing with, it does. We’re working on a number of fronts now. One is we are looking to get the Chinese to step up and put sanctions in place on oil exports to North Korea, which would grind their economy to a halt and grind their ability to continue their nuclear program. Then on the military side, we have our Navy and Marines just off the coast in case of missile shots that are headed to Guam or other places that endanger our citizens. We are ready to knock them down and are ready to take appropriate steps.”