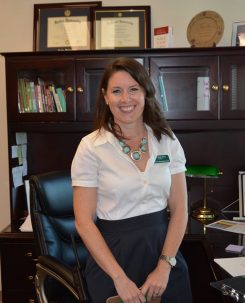 “My first few days at Maple Glen have been exceptional,” Riley said. “Students have been top-notch and have exemplified our guiding principles in so many ways.  I have been impressed by the character of our staff and students as we begin our new school year.”

Riley graduated from DePauw University with a bachelor’s degree in Elementary Education before working for Hamilton Southeastern Schools. From there she began her journey at Noble Crossing after receiving a master’s degree in Educational Administration from Butler University. Riley said she wants to spend more time on building investments and laying groundwork for quality relationships inside the school.

“During my first year as principal, I really just want to invest in and grow my relationships with students, staff and families,” she said. “Relationships are the foundation for our work, and that will be my primary focus. I also hope to have a lot of fun along the way.”

A nine-year Westfield resident, Riley is married and has a 3-year old son.

“We are unique at Maple Glen because we have dedicated staff and community members who have come together to create an outdoor science lab and garden,” Riley said. “This space was originally intended for student learning but has expanded into student giving as well. Students use this space to apply concepts into real-world situations. The food produced from the garden is then donated to Open Doors of Westfield.”

Riley said her goal is to improve the lives of children.

“My goal is to always better our students as individuals and students who will make a difference in their world,” she said. “They were all created for significance, and it is our work to bring this out of them.”