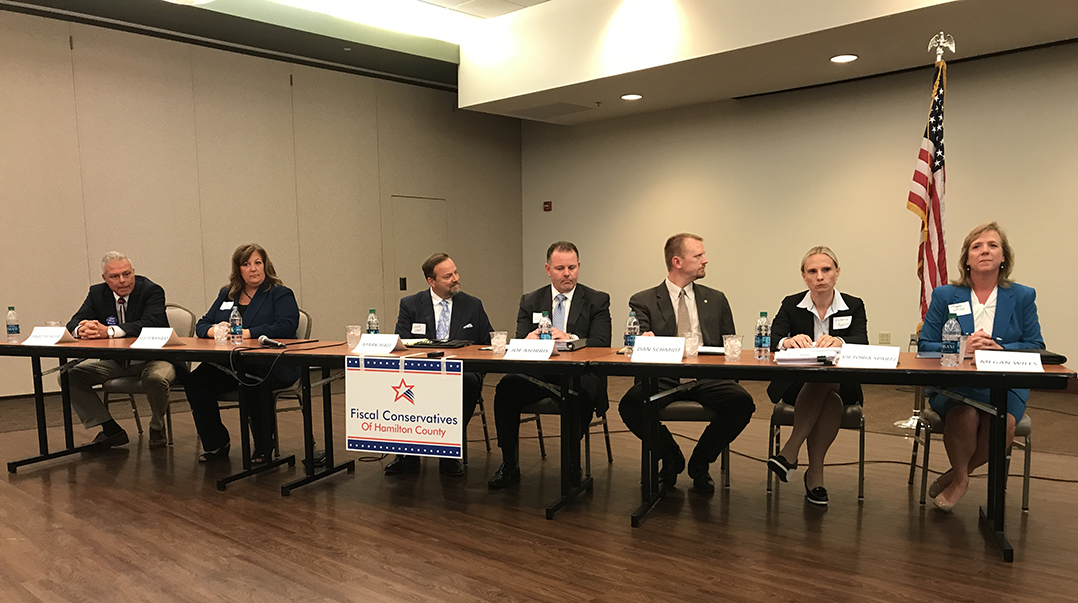 Q: You will be replacing a man with over 25 years of experience. How effective can you really be by being freshman on the block?

Finkham: Touched on the strengths of gaining a fresh pair of eyes and the importance forming new relationships at the Statehouse.

Hall: Spoke on being a self-made business owner, and said if he hadn’t formed relationships over the past years, his family didn’t eat.

Morris: Stressed communication within the House and Senate and mentioned that 25 years ago, Kenley also was the new guy on the block.

Schmidt: Spent time in his past working in the governor’s office during Mike Pence’s tenure so he has already begun to form relationships with committee members at the Statehouse.

Wiles: Said she would start from the ground up, building relationships, identifying issues and working to solve those issues.

Q: What would you do as a lawmaker to prevent heroin and opioid abuse in the state of Indiana?

Beaver: Said he would spend taxpayer money if a program was founded, but isn’t aware of a program currently that prevents someone from using heroin if they want to.

Finkham: Stressed she would work to stop the drug even coming to Indiana, would reevaluate how physicians prescribe pain medication. She said she would not approve medical marijuana as an alternative use.

Hall: Shared the story of a former employee who was not a drug user but made a bad decision and used heroin, causing him to overdose. Hall said the state needs to find a way to prevent doctors from writing too many pain prescriptions or stop those writing prescriptions under the table.

Morris: “Across the state, it’s great to hear new plants are moving in and there are new jobs, but if people can’t pass the drug test, how good is that?” Agreed with Beaver on there being no program in place to stop people using who want to use. Also mentioned mental illness playing in as a factor to heroin use.

Schmidt: Said the problem was multi-faceted, but disagreed with Finkham’s stance on medical marijuana. Schmidt said it was too early of a problem to completely rule out any solutions. Also mentioned starting education at younger levels on preventing heroin use.

Spartz: Said the underlying causes needed to be solved prior to solving the overall problem. “To have a strong country, we have to have strong people. We need to strengthen our people,” she said.

Wiles: Said heroin knows no socio-economic boundary and education was paramount, as well as offering options for people to receive treatment. “We need to continue to look at different options, and provide more resources to police officers to bust drug dealers when find them.”

Q: There are Indiana employers who cannot find people, cannot find a workforce. What plan or thoughts do you have on Indiana closing the skills gap and labor gap?

Beaver: Said he believes the county did a good job addressing this problem by bringing an Ivy Tech campus to Noblesville. Also mentioned he believes there are plenty of jobs available, but people need to pass drug tests to be hired.

Finkham: Stressed adding programs to schools such as internships, specialized programs and training for specific jobs. “There are lots of kids educated in the state and they leave state to take employment elsewhere,” she said. “We need to do a better job at making Indiana an attractive place to stay.”

Hall: Said he wasn’t going to wait for the government to catch up and his businesses began apprenticeships five years ago.

Morris: Wants to see vocational and alternative education such as woodshop and mechanics back in school curriculum.

Schmidt: Said students needed to be taught the relevance lessons have with certain jobs. “Instruction in the classroom and programs needs to show relevance of what (students) are learning compared to a potential job down the road.”

Spartz: Explained the difference between schooling and knowledge. “No amount of schooling is going to give you the skills,” she said. “More people in college should advise kids how to get jobs.”

Wiles: “We need to connect high school students with opportunities to pursue careers and support themselves, and that may not be a four-year college degree,” she said.

Other questions including candidates’ thoughts on allowing the sale of alcohol on Sundays, their stance on school funding and their stance on the gas tax. Many of the candidates said they would be open to allowing alcohol sale on Sundays except for Hall, who said his traditional Christian values did not support that. Many also said although they were not content with the school funding formula, the program has come a long way. Spartz stressed simplifying the formula, and Hall and Morris suggested allowing the funding to follow the student.

Regarding the gas tax increase, the candidates were split. Wiles, Schmidt and Finkham said although they weren’t in Kenley’s position at the time and didn’t have all the facts, they supported the tax increase. Spartz said tax increases in general makes the county less desirable to live in and less competitive. Hall said that the state should use the surplus funding it already had to allow for future infrastructure instead of the tax. Morris and Beaver said if the money collected from the gas tax actually goes toward infrastructure and not other programs, they were for the tax increase.