You are at:Home»Current in Zionsville»Spartz gets nod to replace Kenley

Victoria Spartz took it to the limit. 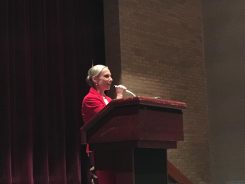 On the sixth and final ballot Sept. 6 by Republican precinct committee members, Spartz earned the nod from a field of seven candidates to replace District 20 State Sen. Luke Kenley for the remainder of the final three years of his term.

Spartz is the chief financial officer for Office of the Indiana Attorney General’s office and is on the 5th Congressional District Republican Central Committee.

Spartz, 38, came to the U.S. from the Ukraine 17 years ago. She previously was vice-chair of the Hamilton County Republican Party.

“First of all, when you work with people and you develop relationships, but also you deliver results,” Spartz said. “That’s something people see that, you work hard and help with deliver ideas. People appreciate when you fight with them.”

Spartz said it was a very positive campaign.

“I’m really proud of all the other candidates,” Spartz said. “They did a wonderful job. It was all about what can you bring to the table. Nobody was doing cheap shots. What I bring to the table is fresh ideas and new thoughts based on my professional experience and also working with a lot of people in the party. When you are running for office, you have to be working with a team. Ultimately, our voters expect results. They don’t want propaganda. They want results and solutions to real problems.”

Spartz said she didn’t have a speech ready because she knew she had tough competition.

“In life, you always have another battle to fight,” Spartz said. “It’s huge responsibility.”

Joe Morris was eliminated in the first round of the caucus voting, followed in successive rounds by Dan Schmidt, Brad Beaver, Sue Finkam and Mark Hall. Finally, when it was down to two, Spartz was able to gain a majority of the 93 votes.