You are at:Home»Current in Zionsville»Little school on the prairie: Family farm becomes new campus for classical education in Boone County 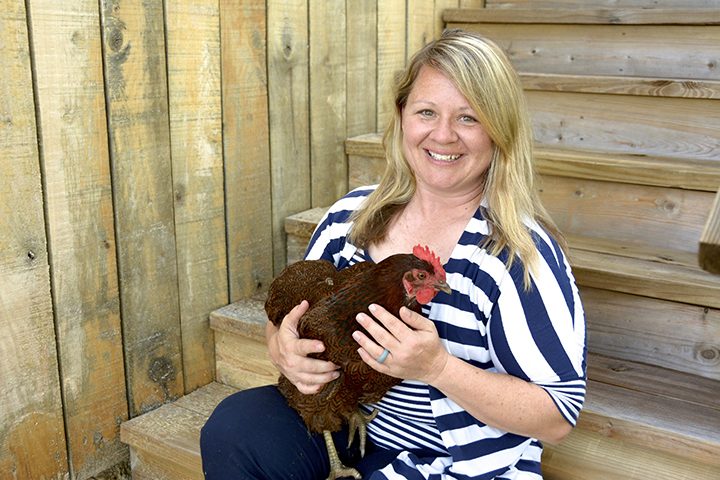 Rachel Cotteleer holds a chicken at Boone Prairie School. Cotteleer will teach fifth through eighth grade at the school, which will hold its first classes in September. (Photo by Lisa Price)

Boone County residents Shawna and Bret Reinhardt had a vision for a classical education school that would be affordable and wouldn’t require driving halfway across a neighboring county.

That vision will become reality when the Boone Prairie School opens in September on the Reinhardt’s Whitestown property. Bret Reinhardt built the school’s structure while his wife Shawna built the curriculum. 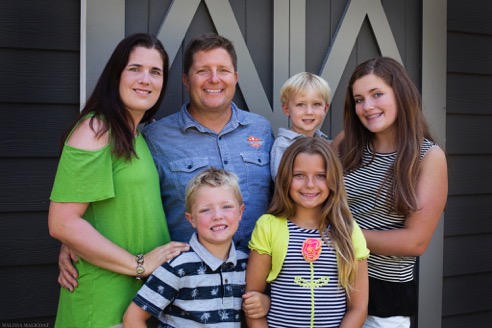 “This curriculum is a little different,” Bret Reinhardt said. “It’s really focused on teaching up to everyone and challenging the kids from the very beginning.”

Hands-on interactive learning will be a focus of the school’s programming, which dovetails with Rachael Cotteleer’s plans.

Cotteleer, who will teach fifth through eighth grade at the school, received a grant from the Lily Endowment Teacher Creativity Fellowship last spring for her proposed Paw-sitively Powerful Program. She was among 100 teachers across the state to receive a $12,000 grant, which allowed her to explore the therapeutic connection between people and animals. She spent the summer finding ways to incorporate that connection into a plan for students.

“I love animals and I love teaching, and to fuse it together, I think there’s such potential,” said Cotteleer, who has been teaching for 23 years. “Do something that you love and are passionate about and that will renew you and bring you back as a more impassioned educator. I really hope that I can convey the potential of that healing and that empowerment that the animals can give you.”

The grant was written while she was employed in a special education role with Western Boone Community Schools, but she was able to tweak it to meet the opportunities at Boone Prairie. Cotteleer was ready for the change to middle school and found a good option in Boone Prairie.

In Canada, she visited Dreamcatcher Nature-Assisted Therapy Association, which utilitzes a menagerie of animals for therapy. During one poignant session, students cared for donkeys and hens during a therapy.

During her time at Utah’s Best Friends Animal Sanctuary, the largest no-kill shelter in the United States, she witnessed community involvement such as senior citizens caring for kittens and yoga classes with a variety of animals producing an additional sense of relaxation.

In South Africa’s Bambelela Sanctuary she was able to tend to special needs monkeys unable to return to the wild. She was struck by the similarities between animals and humans.

“My motto has been, ‘Disability does not mean inability,’” Cotteleer said. “I was really struck that even within the animal kingdom that applies.”

She finished her travels at Namibia’s N/a’an ku sê Wildlife Reserve, tracking animals and releasing rescues into the wild.

“Animals have personality and stories just like we do,” she said.

During her travels, Cotteleer was amazed by the bond between humans and animals.

“I can go halfway across the world and animals are still giving the same connection,” she said.

Cotteleer would like her students to learn compassion for people of all abilities and explore how animals can help facilitate conversation. Her classroom goal is for students to research local therapy programs where animals are used to help others, such as hippotherapy and veterans programs.

“I want the students to be really empowered and see where it goes,” she said.

Cotteleer plans to  partner with special education programs at nearby public schools and collaborate on the power and potential of working with animals.

Because Boone Prairie is on a farm, there will be chickens on school property, which Cotteleer is eager to teach students that many animals can be used for therapy.

“I think the vision is that kids will really learn that if you have an idea you can be empowered to do your own business,” she said.

Learn more about the school at booneprairie.org.

An investment in education

Boone Prairie School will open in September at 5175 E 300 S in Whitestown with five teachers and approximately 30 students who will have classroom lessons three days a week and be home-schooled the other two days.

The Reinhardts created the school after exhausting other educational Latin-based programs in the area, determining them to be too far or too expensive.

“As a family we decided that we were willing to make an investment in our children’s education, but we wanted to investigate to find if there was a better way,” said Bret Reinhardt, a father of four.

Through his research into co-ops and homeschooling, Reinhardt discovered Hillsdale Academy in Michigan, part of Hillsdale College, which offered to provide curriculum support and teacher training if the Reinhardts were willing to open a school.

The couple toured other schools being supported in the same way and discovered a few doing what they would like to do with regard to board governance and administration. The Reinhardts plan to “take this classical Latin curriculum and give it a practical education in a farm environment,” Bret said.

This year, students will be in pre-K through eighth grade, although the school’s curriculum will be extended through 12th grade.

“The reality is that we knew our lower grade classes would be where we would grow,” Brett said.

The school is seeking nonprofit status and will be able to keep tuition affordable because the Reinhardts own the property and plan to offset expenses through other businesses on the property to subsidize the school.