You are at:Home»Current in Carmel»Carmel Community»Carmel to build roundabout at 4th and Range Line, relocate archway 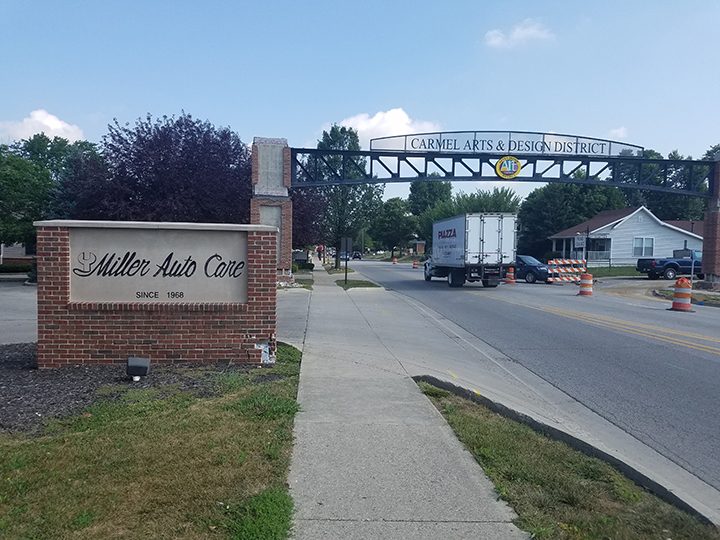 The Arts & Design District sign on South Range Line is being moved to make way for a roundabout at 4th Street South. (Photo by Ann Marie Shambaugh)

A new roundabout is set to be constructed soon on Range Line Road, but unlike several others, this one isn’t replacing a traffic light or a stop sign. Currently, there is no stop in traffic at this area.

Construction on the roundabout at Range Line Road and 4th Street South is set to begin Aug. 21 to help create an entryway into the Midtown area, which is a new part of town along the Monon Trail between Main Street and Carmel City Center. More than $100 million in development is planned for the area, including a new headquarters for Allied Solutions, which will create 614 new jobs. The city will extend 4th Street into that area, which is why the new roundabout is needed to help get Allied employees in and out of the area during rush hour.

“There’s going to be a new street installed and we need to get the traffic in and out,” Carmel Mayor Jim Brainard said. “If we didn’t build this roundabout, it could become a traffic nightmare. If you don’t build the infrastructure to anticipate development, you can have problems. We really try to stay ahead of development.”

In some office parks in Carmel, off-duty police officers will direct traffic during rush hours for employees arriving and departing work. Brainard said roundabouts, along with staggered start and end work times, should alleviate a similar need in Midtown.

The Carmel Arts & Design District archway is being disassembled and moved to make room for the roundabout. Brainard said he was unsure where the archway would go. As a result, construction was initially delayed. It was originally scheduled to start Aug. 7 but work didn’t begin on the archway and 4th Street until Aug. 14. The roundabout work should begin  Aug.  21, and there will be a full closure for 30 days.

As for detours, motorists coming from the south can reach Main Street in Carmel Arts & Design District by taking Keystone Parkway north and getting off on the Main Street exit or by turning left onto City Center Drive and taking a right turn on 3rd Avenue SW to head toward the Arts District.

To make way for the construction, the Carmel Redevelopment Commission has agreed to pay a little more than $1 million to acquire Miller Auto Care’s land. The auto shop can remain open even after the sale, but much of the customer parking will be taken away from this project, which is why the owners said they are likely to relocate in the future.