You are at:Home»Current in Carmel»Carmel Community»Purdue’s Cline eager to play at Carmel High School one more time 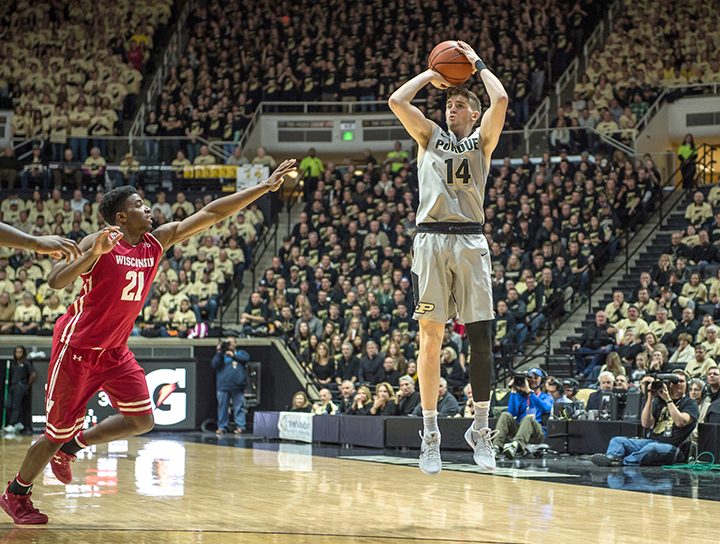 Ryan Cline is psyched for this coming home party.

The Purdue junior basketball player will join his teammates in an exhibition against Team Canada at 7 p.m. Aug. 11 at Carmel High School. Cline played on the Class 4A state championship teams as a freshman and sophomore. Purdue, representing the U.S., will be preparing for the World University Games Aug. 19 to Aug. 30 in Tapei, Taiwan.

The 6-foot-6 guard said it will be nice to just be able to play at Carmel one more time.

“I thought I was done, but it’s nice to go back and get in front of the hometown crowd,” Cline said. “Hopefully, we’ll get a win against Canada. That’s all I really care about.”

Cline’s last appearance on the CHS floor wasn’t a game but the American Family Insurance High School 3-point shooting contest, which was held there in 2015 before the Final Four was held in Indianapolis. The crowd went wild when Cline won the national competition.

“There were times that were a struggle. Everyone goes through that,” Cline said. “I’ve been working on more off-the-dribble stuff, creating stuff for my teammates, being able to go off the dribble and make a pull-up bucket. I feel like my game has extended a great amount, and, hopefully, I get to show that this year and at Carmel.”

Playing in the World University Games should give Purdue a boost on the season. The Boilermakers, who lose leading scorer and rebounder Caleb Swanigan, reached the Sweet 16 of last year’s NCAA Tournament. Cline said the early start will be good for team chemistry.

“We’ll have seven or eight games we’ll be able to play and get to know each other’s strengths and weaknesses,” he said.

Tickets for the game are $20 for adults and $10 for ages 18 and younger. For more, visit purduesports.com.