You are at:Home»Current in Carmel»Carmel Community»Forensic entomologist to speak at Carmel Clay Public Library

Growing up, Christine Picard was afraid of bugs. Today, she studies black blow flies and maggots on decomposing bodies.

“The more I learn about them, the less scary they seem,” she said. 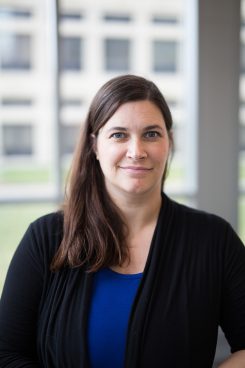 At IUPUI, Picard is an assistant professor and forensic entomologist. She researches how insects can be used in crime scene investigations. On Aug. 9, Picard will present the history of the forensic use of insects at the Carmel Clay Public Library.

Because flies are attracted to dead animals and arrive quickly after death, Picard said the life stages of maggots can help investigators determine time of death.

“They’re like a clock,” she said. “And we’re figuring out how they tick.”

When entomologists arrive at crime scenes, Picard said they first determine the species of maggot and then estimate age using characteristics like size. But estimating age solely on physical characteristics doesn’t always work because maggots, even of the same age, vary in size and shape.

“If you grab 10 10-year-old boys and line them up next to one another, there will be variation in height even if they’re the same age,” she said. “It’s the same with maggots.”

This is when entomologists turn to genes, Picard said. By sequencing fly genomes and studying gene structures, entomologists can estimate how quickly or slowly a maggot might  develop and use that information to more accurately determine age.

But it’s only possible because of recent technological advances during the genomic revolution, she said. Now, mapping a genome can cost only a couple thousand dollars as opposed to at least $40,000. Researchers also have the technology to process huge amounts of data necessary for mapping genes.

“The field has grown to the point that there’s many more questions that we’re able to ask and a lot more tools at our disposal in order to answer them,” she said.

Although forensic entomology has only been used in the U.S. criminal justice system for 50 to 60 years, Picard said its origins can be traced to a Chinese general named Sung Tzu in the 13th century.

After a murder in a rice field, Tzu gathered up all the men in the village and had them lay out their sickles. The flies, attracted to invisible traces of blood, all swarmed to a single sickle, and the owner of that sickle confessed to the crime.

Even during the Black Death, people began to take note of the role of insects among the thousands of bodies in the streets, Picard said.

“It’s taken hundreds of years to connect the dots, but that framework was there through just observing the natural world,” she said.

Even as forensic entomology progressed, Picard said the two questions at its core have remained the same: “What is it?” and “How old is it?”

Picard said forensic entomologists typically work at university research labs rather than crime labs. As a result, it’s often years after a crime occurs that entomologists are brought in to study evidence. Picard said she wants her presentation to bring more awareness to the field so that people consider entomology as a tool when analyzing crime scenes.

She said she also hopes attendees learn something about insects and what they do. She also promises she won’t show any pictures of dead bodies.

“I want people to see that while maggots may be disgusting at first glance, they’re so useful,” she said. “I want to give maggots a good name.”