You are at:Home»Current in Zionsville»Author Michael Stafford visits Black Dog Books for signing

Black Dog Books will host a book signing from 2 to 4 p.m. Aug. 12 with Michael Stafford, author of “Between the Walls of Time.” The historical fiction centers on Cyrus Kohler, who starts an organization called The Front that one day becomes a “major third political party in America.” 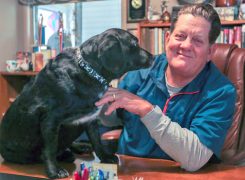 “They call themselves The Unbought and have no PACs or lobbyists. Everyone joins for $1,” said Stafford, a Hendricks County resident. “By book’s end, The Front has 32 million members. Surrounding the main plot are an ongoing number of other events that make the story come alive.”

Stafford spent more than five years working on the 104-chapter book. It is divided into three books within the main book. It is the third full-length novel he has written and the first he has published.

“The title came from my understanding of our evolutionary spot in this sea of time we now find ourselves in on Earth. We are a poorly evolved species that still believes violence is a solution to social problems,” he said. “We live in a time that has not yet committed to peace. We worship unseen gods as all our predecessors have done before us.”

“Between the Walls of Time” was released June 15 by Grey Swan Press, the same publisher of Oprah Winfrey’s books. Stafford was introduced to the publishing group run by Jim Kelley and his daughter, Jocelyn – who worked for Winfrey during her book club years – by online blogger Jenn Mattern.

“Grey Swan publishes three to four novels yearly and does a wonderful job with emerging writers,” Stafford said. “Everyone behind the book feels this is a worthy successor to powerful books about our government and society such as ‘Brave New World’ and ‘Atlas Shrugged.’ Only time will tell, but our hopes are high. It is quite a story.”

Response to the book has been overwhelmingly positive, Stafford said.

“I want readers to remember the characters who lead this drama and what they stand for. I want readers to come face-to-face with the reality of social congruence and the Doctrine of Limited Rights. I want people to expand their mental universe, to think bigger about what is possible,” he said. “I want everyone who reads this book to decide for themselves if The Front, a more empirical, science-based organization, is the way to our future. It would be great for the planet if they acted on their decisions.”

“Between the Walls of Time” is available at area bookstores, Amazon, abebooks.com, or Stafford’s website, johnmichaelstafford.com.