You are at:Home»Current in Geist»Passionate Hoosiers: Benners’ memorable year keeps getting better 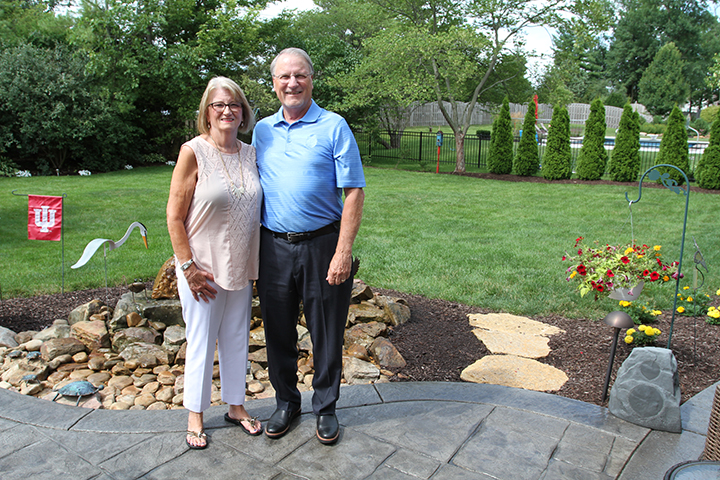 Bill and Sherry Benner recount their lives and careers as Indiana proponents, working in Indiana sports and businesses. (Photo by Sadie Hunter)

The last 10 months have been quite eventful for Bill and Sherry Benner.

The long-time Geist residents’ younger daughter, Ashley, got married in October 2016. That was followed by Sherry’s retirement from Humana Health Insurance in January. 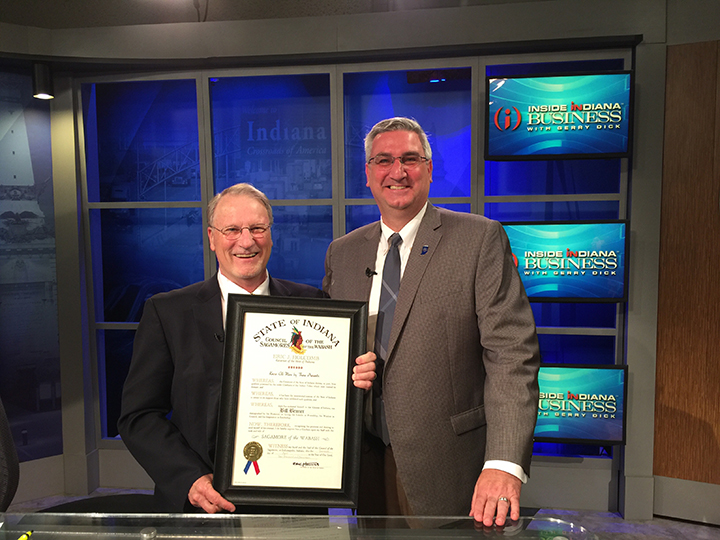 Bill Benner receiving Sagamore of the Wabash award from Gov.

In April, Bill was inducted into the Indiana Sportswriters and Sportscasters Association Hall of Fame, and then was surprisingly presented with a Sagamore of the Wabash award by Gov. Eric Holcomb during filming for “Inside INdiana Business,” a TV show in which Bill is a regular contributor.

“I was stunned,” Bill said. “(Holcomb) was very genuine and kind in what he said. That was cool.”

In May, Bill, senior vice president of corporate, community and public relations for Pacers Sports & Entertainment, joined then-Pacers president Larry Bird and a contingent in presenting the team’s bid for the 2021 NBA All-Star game.

In between, there have been countless concerts, Pacers, Fever, Colts and Indiana University football games along with a trip to Alaska this month and some visits to Colorado to see daughter Allison and their two grandchildren.

“We have incredibly full lives,” Bill said.  “Early in May, we looked at the calendar for the rest of the year, and we had two empty weekends, and we already filled up one of those.” 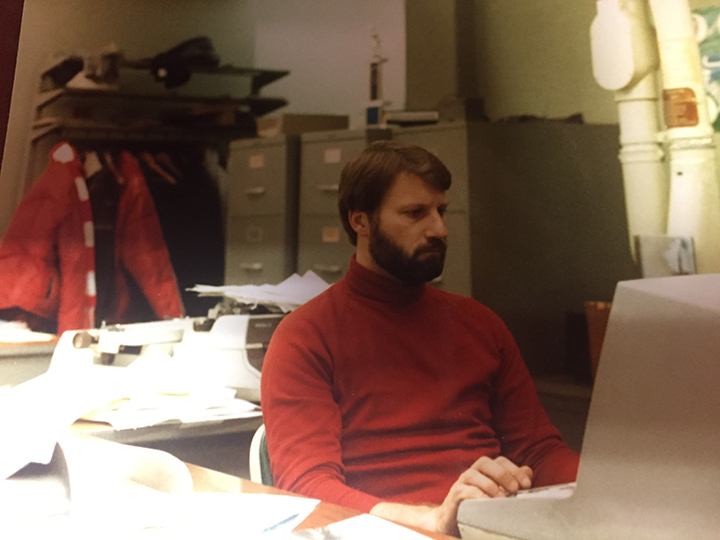 Bill Benner at his computer at the The Indianapolis Star office at 307 N. Pennsylvania St. in the early 1980s.

As part of his position, he addresses groups several times per year. He will speak at the Westfield Chamber of Commerce luncheon July 20 at The Bridgewater Club in Carmel.

Bill focuses on the many uses of Bankers Life Fieldhouse and the charitable mission of Pacers Foundation, which he helps direct.

“I always say our bottom line is what goes up the scoreboard, but there is so much more to Pacers Sports & Entertainment, certainly more than I realized when I took the job,” said Bill, whose brother, David, has been the Pacers’ media relations director since 1994.

When Bill joined the Sports Corp., Sherry began volunteering for corporate challenges and the NCAA Final Fours for men’s and women’s basketball.

“I was the team host for the Stanford women (in 2011) and the band and cheer host for the men’s Final Four two or three times,” Sherry said. “I worked for the (Indianapolis) Super Bowl volunteer committee.”

Bill was the co-chair of the Super Bowl media relations committee.

Sherry’s favorite moment was serving as the band and cheer host for George Mason at the 2006 Men’s Final Four.

“We had the most fun with them,” Sherry said. “They were on the least budget of any organization I think I ever worked for. The other team host and I literally brought home their clothes and did their laundry twice because they didn’t have enough for all the things they had to do. They were the most appreciative kids.”

Since retiring, her passion has been focused more on church-related activities, primarily volunteering for St. Vincent de Paul in Noblesville, where there is a thrift store and food pantry.”

The Benners are long-time proponents of Special Olympics.

“As an occupational therapist, I was involved early on in my career with Special Olympics,” said Sherry, who started out working at Indianapolis Public Schools’ school for the developmentally disabled in 1974.

“I was so blown away by it I wrote an article about it,” said Bill, who serves on the Special Olympics Indiana board.

It’s a passion Allison shares as she works for Special Olympics Colorado.

Colorado was a frequent vacation spot even before Allison moved there.

“Even when the girls were young, we took ski vacations to Colorado,” Bill said.

The Benners moved to Geist in 1988. Their two daughters graduated from Hamilton Southeastern High School. Here are five things Bill said they love about Geist:

1. The lake, especially at sunset. We first started boating on Geist in the mid-70s and the attraction of the water was one of the reasons we decided to build our home here.

2. The schools, that’s another reason we built here, the quality of the HSE system. Our girls were blessed to have excellent teachers and administrators.

3. Friday nights at Eddy’s or Puccini’s, you will generally find us at one or the other almost every Friday night, but especially during summertime.

4. Our neighbors, we have been blessed with wonderful neighbors. We were able to watch our children grow together and with new arrivals, we’re now able to watch the next generation.

5. Holy Spirit at Geist, from the storefront on 96th Street to Masses at Fall Creek Elementary and then to the current campus, we’ve been part of our church’s growth into a thriving faith community.

1. Pan American Games (in 1987), it really signaled to the nation and world that we had arrived as a destination for sports.

2. 2012 Super Bowl, the energy and vibe in the days leading up to the game was unlike anything anyone could have imagined (and the weather wasn’t too bad, either).

3. Opening game in Market Square Arena in 1974, I was the Pacers’ beat writer at the time; MSA was the catalyst for the downtown development that would take place over the next three decades.

4. Being in the RCA Dome with my daughter, Ashley, when the Colts beat the Patriots in the AFC Championship Game to reach their first Super Bowl.

10. Any Saturday afternoon in Hinkle Fieldhouse.