You are at:Home»Current in Zionsville»Runners ready for 8-Hour Dream Endurance Race 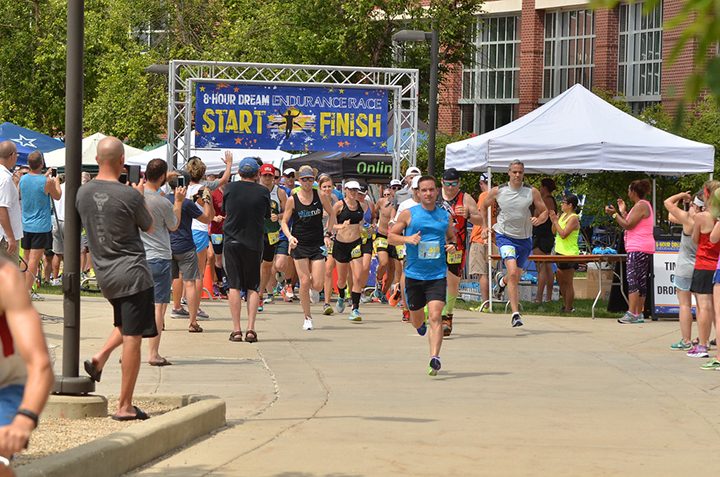 Runners in the 8-Hour Dream Endurance Race can choose a 5K course or 1.9-mile course to run for eight hours. (Submitted photo)

On Saturday, Indianapolis resident Andrew Bartolacci will wake up to a breakfast of French toast sticks with his 1-year-old son before driving to Butler University to run for eight hours straight.

“My lungs will be able to take the eight hours, it’s whether or not my legs will give out that’s the question,” he said with a laugh.

On July 22 Bartolacci will run in the third annual 8-Hour Dream Endurance Race. Staged by the Carmel Road Racing Group, race participants run as far as they can in eight hours. Bartolacci’s goal is to break 40 miles for the first time.

In preparation, he runs every other day. Every Saturday, he does long runs upwards of 30 miles. He also drinks plenty of water and eats bananas to prevent cramps and make sure his legs can carry him through the race.

“You have to train for it, really work for it,” he said. “You won’t be able to just start out and run eight hours. You’ll have to work your way up and not be discouraged.”

Fishers resident Brad Baumgartner runs 2,000 miles a year—a mileage he said is necessary when running four to five ultramarathons each year. During the race, he hopes to run 40 to 45 miles as practice for a 50-mile ultramarathon in September.

For Baumgartner, finishing races has always been the best part, but it also pushes him to do longer and longer races.

“When I finished, I thought I could go farther,” he said. “There’s something about finishing and feeling not quite done, so you want to try the next thing.”

Zionsville resident Mike Cole, who’s shooting for 50 miles, said the feeling of accomplishment is what drives him to run.

For 25 years, Cole has run for that feeling of accomplishment, but Saturday he’s running for something more than just himself. Cole hopes to raise at least $500 for his friend’s charity—the Joseph Maley Foundation, which spreads mental health awareness and offers inclusive athletic programs for children.

Bartolacci is also running for a cause. As a physical education teacher and athletic coordinator for IPS schools, he rallied enough players for three soccer teams, but IPS only had the money to cover registration costs for one.

“I had to tell a lot of kids who were really excited that they couldn’t play, and I don’t want to have to do that next year,” he said.

So now, he’ll earn $20 for every mile he runs, which will be added to a $1,500 grant that will help pay for his students’ equipment and fees.

“What’s motivating me to do 40 is that each mile I run is more money for my students, more kids getting the opportunity to play,” Bartolacci said.

On the morning of the race, Bartolacci said he’ll be nervous. He’ll have to remember to control his adrenaline, to hydrate, to not go out too fast, but he’s excited to step into the powerful atmosphere he expects before the race.

Despite the fun atmosphere, Baumgartner said there will be dark moments during the race that runners will have to plow through mentally. Each time he hits a mental wall during a race, Baumgartner calms himself down.

“I check myself from head-to-toe and ask myself if I’m okay,” he said. “And then you just talk yourself through it because there’s really no way of avoiding it. It happens, and you just have to keep pushing.”

Cole said pain is inevitable during the last few hours, but eventually a runner’s body gets used to it. There’s not much you can do to prepare yourself for mental blockades besides running, so the best thing to do is take care of your body, he said.

“It’s usually not a lack of training that stops people during races,” he said. “It’s not eating right or not drinking enough water. You have to take care of yourself to finish.”

In order to take care of his body, Cole brings along Clif bars, energy gels, fruit, salt tablets and water to make sure he’s replenishing the fluids and salts he loses, especially in the July heat.

Baumgartner relies on peanut butter and jelly sandwiches, chicken noodle soup, figs, dates and flat Coke to get him through runs.

“You need to give yourself fuel to carry you through the race,” Baumgartner said.

After races, Baumgartner treats himself to the largest hamburger he can find and a beer, granted that he reaches his goal of finishing without requiring medical attention, he said.

Above all, he said he wants people to know that a race as long as the 8-Hour Dream Endurance Race is not too far out of reach for anyone.

“Folks who think they can’t do something like this actually can,” Baumgartner said. “It’s like 90 percent mental and if you can convince yourself that you’re capable and put in the work, you can do it.”