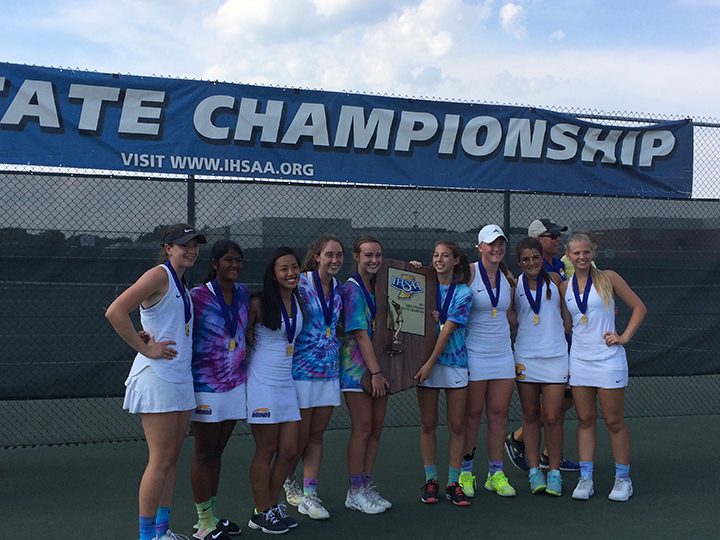 Cramping badly after her three-hour victory over defending state singles champion Maeve Koscielski of Cathedral in the semifinals, junior Lauren Lemonds was in an ambulance receiving IV fluids.

“We were preparing subs,” Fields said. “We had a very bad feeling about whether she was going to play a second match.”

Lemonds was more confident than Fields that she would play.

“A lot of athletes would panic, but she seemed calm about it,” Fields said.

Lemonds not only came back to play but she again rallied to top Providence’s Halli Trinkle in three sets in No. 1 Carmel’s 5-0 victory over No. 4 Providence June 3 at North Central High School. The Greyhounds had beaten No. 2 and defending state champion Cathedral 4-1 in the morning semifinals. Trailing a set and behind 4-1 in the second set, Lemonds beat Koscielski 3-6, 7-5, 7-6 (7-5).

“I had a bad headache and was cramping badly,” Lemonds said. “I was kind of worried because I only had two hours.”

Fortunately, her father owns an ambulance company and got on the scene quickly.

“I didn’t know I needed a doctor’s clearance, but I did,” Lemonds said.

Lemonds said she felt better as the match went on as she rehydrated. Fields said doctors watched her closely and made sure she had food.

“She digs in for the team,” Fields said. “Part of our team is that we all love each other and get along well. She epitomizes that.”

The Greyhounds completed a perfect 19-0 season en route to their fourth state title in five years and ninth overall. It was the third state title for senior Zoe Woods, who played No. 3 singles.

“It was so exciting. It makes the entire season so worth it,” Woods said of Lemonds’ gutsy performance.

Fields said it was crucial the Greyhounds remained focused after topping Cathedral.

“We had to remind them they weren’t champions yet,” Fields said.

It was second-year coach Fields’ first state girls team title. Fields has three boys state team titles as a coach, one with Carmel in October and two with North Central.

Carmel tied its own record of seven IHSAA state team titles in a school year that it set in 2011-12.