You are at:Home»Current in Carmel»Outrun the Sun race to raise funds for melanoma research

Jenny Sarno has a powerful emotional connection to Outrun the Sun. 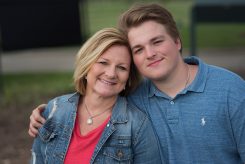 Jenny Sarno and her son, Will Patton, are devoted to sun safety. (Submitted photo)

Sarno is one of the founders of the nonprofit, which will hold its 13th Outrun the Sun Race Against Melanoma at 6 p.m. June 17 at the Lawton Loop Parade Grounds, with courses through Fort Benjamin State Park.  The run raises money for medical research for melanoma.

Sarno’s first husband, Gary Patton, died from melanoma in 2002 at the age of 40. Her husband was a life-long friend of Rob Day.

Day’s wife, Anita, and her sister, Jonna MacDougall, lost their father, John Busse, to melanoma the same month. Along with another friend, Marci Reddick, they formed the Outrun the Sun foundation.

“It’s in my heart all the time,” said Sarno, a 1982 Carmel High School graduate and Carmel resident.

The same is true for her son, Will, who was just 3 1/2 years old when his father died.

“Outrun the Sun is very important to me,” said Will, who graduated from CHS last month. “It allows me to get involved and educate others of the risks of skin cancer.  I do not want others to lose a family member like I did.”

Sarno said her son, who is going to Indiana University, is always passing out sunscreen and talking to other kids about the issue.

“Will wants to be a dermatologist,” said Sarno, who married Mark Sarno, an ’82 CHS graduate, eight years ago.

Sarno said her son has volunteered for the run through the years.

“He’s there for me (on race day) because that is a very emotional day,” Sarno said. “It’s amazing to see all these people there for this one cause.”

Patton, a 1980 CHS graduate and Purdue graduate then living in Fishers, died approximately a year after being diagnosed.

Sarno said her husband, who had blonde hair and blue eyes, always enjoyed outdoor activities and was likely sunburned a lot when he was younger.

Sarno is encouraged by the medical progress.

“Gary’s doctor sometimes comes to the race and he says, ‘If he was alive today, we might be able to help him,’” Sarno said.

Sarno, who is an associate real estate broker with Century 21 Rasmussen, said prevention and education have always been important to her.

To register for the races (5-mile, 5K and 1-mile), visit outrunthesun.org