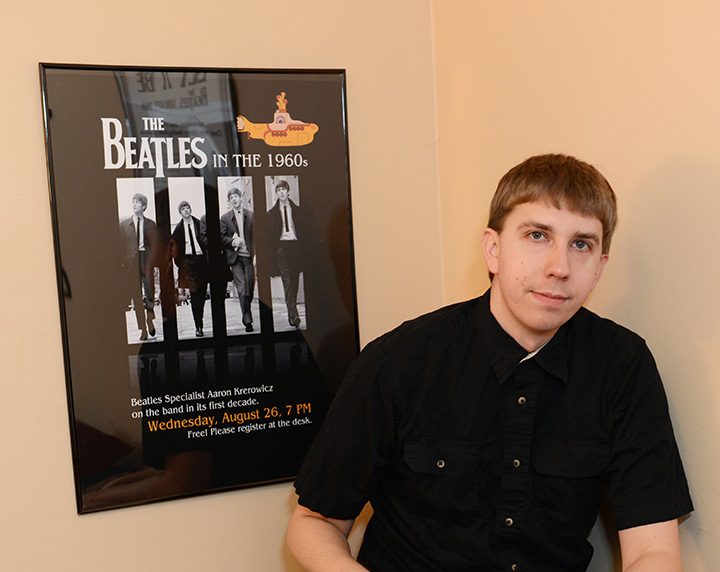 Professional Beatles Scholar Aaron Krerowicz will be giving a lecture on “The Rise of Beatlemania” from 6:30-7:30 p.m., June 20 at Hussey-Mayfield Memorial Library in Zionsville.

Krerowicz is America’s only full-time Beatles scholar. In 2011, he won a Beatles-focused research grant through the University of Hartford and has since presented his findings across the United States and England, conducting more than 300 lectures.

“Last time he came he packed the room,” said Orton Ortwein, Adult Programming Coordinator at Hussey-Mayfield Memorial Library, “The focus of this particular lecture is the early days of Beatlemania in America, and how Kennedy’s assassination led to the rise of Beatlemania.”

Krerowicz plans to speak for 60 minutes, discussing John F. Kennedy’s assassination in 1963 as a cause of the Beatles’ sudden popularity in the United States in early 1964.

“We’re looking at social, historical and political forces that allowed both Kennedy, and then subsequently the Beatles, to find success,” Krerowicz said. “The fundamental premise is that both Kennedy and the Beatles were figureheads of youth culture. When Kennedy died, that opened the door for another youth-centric entity to take his place.”

Krerowicz, now a Carmel resident, grew up in Wisconsin and moved to Indiana in 2004. He graduated from Butler University in 2008 with a degree in Music Theory and Composition, then studied at University of Hartford before returning to Indiana in 2015 to begin lecturing full time. He said living in the “crossroads of America” makes traveling for his lectures much easier. Krerowicz said he upped his Beatles scholarship to a full-time profession upon returning to the Midwest.

“My background is as a classical composer and music theorist. I take those analytical skills that I learned in school and apply them to Beatles’ songs,” Krerowicz said. “I will play musical clips throughout the lecture, but this particular focus is more on historical aspects.”

Krerowicz’s third Beatles book, “From the Shadow of JFK: The Rise of Beatlemania in America,” was released in June 2015 and expounds upon the topic of the upcoming lecture. He also just released his fourth book, a two-volume encyclopedia called “BEATLESTUDY.”