For years, the Carmel High School Alumni Association would meet the second Saturday in June. No more. 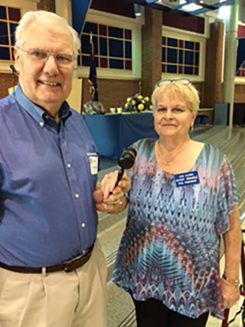 The 125-year-old association canceled the banquet that was held at the CHS cafeteria because of declining interest.

“The attendance (used to be) so great at the annual banquet,” said CHSAA board member Jo (Branham) Smith, a 1964 graduate and Carmel resident. “We would have people from the 1930s. People would fly in from Florida. It’s dwindled to the point that this year we cannot afford to have it.”

Kathy (Whittaker) Venable, the group’s president and 1965 graduate, said there were just 50 people at last year’s event.
“That’s not worth putting a banquet on,” said Venable, a Carmel resident. “As the years have gone, the people that normally came have died or can’t come anymore. They love to come to see people in their class as well and others. The younger people haven’t stepped up to replace them at all. It’s gotten to the point where we don’t have good addresses any more to send out the notices. We got like a hundred back last year. It’s just become a financial drain with no money coming in.”

Another factor was the class of 1967 decided to hold its class reunion on a different weekend. Classes would often hold their 50th reunion the night before the banquet.

Smith said the main focus of the association recently has been to provide a scholarship or two to a CHS student who will attend a state-supported university.

“That was one of the reasons everyone came and donated and spent money, along with camaraderie,” Smith said.

Smith said there are a lot of journals and notes from the 1800s when the organization was started.

“We don’t know if there will ever be another banquet or not,” Smith said. “We hope to continue the scholarship.”

The scholarship is funded by membership dues and donations.

Smith said right now they can probably fund the scholarship for a couple more years with current funds.

Natalie (Thomas) Cotton, a 1957 graduate, used to babysit Venable and remains involved with the association as treasurer.