You are at:Home»Current in Fishers»Sikh Resolution recognizes contributions of American Sikhs 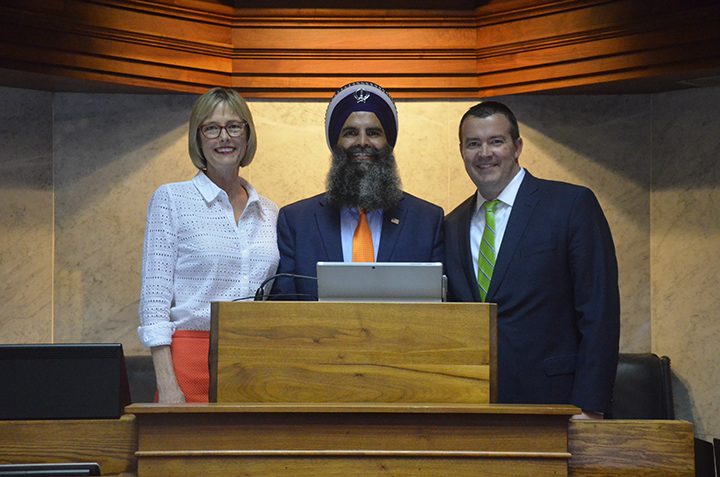 On April 20, State Sen. Aaron Freeman introduced the Sikh Resolution, which recognizes the contributions of American Sikhs in the U.S. and the state of Indiana. Sikhs are devotees of Sikhism, a monotheistic religion founded in India’s Punjab Province in the 15th century by Guru Nanak.

“In the Midwest, the Sikh community has been growing in the last decade and a half. By 2000, there were only 10-20 Sikh families in Indiana. Now, there are estimated to be 10,000 Sikh individuals in Indiana. We are the fastest-growing business community,  having 3,500 businesses,” said Gurinder Singh Khalsa, founder of Sikhs Political Action Committee.

The group wants to promote greater awareness of the Sikh culture.

“We launched last year. We want sustainable awareness,” Singh Khalsa said. “Fifteen million students graduate high school every year in America. We want Sikhs in the history books. Sikh culture is not part of the history curriculum. We want to give back to this nation by serving in the U.S. military and in public offices. This will be another way of making people aware.”

Since 2001, Sikhs have been the target of hate crimes and misidentified as radical Muslims.

“Sikhs have been in the United States for over 100 years. Sikhs have been targeted for hate crimes and bullying in the schools because of our appearance and what we wear,” Singh Khalsa said. “We are the victims of mistaken identity. We respect every religion and believe in freedom of faith. Americans have the wrong perception of us because of a lack of awareness, not ignorance.

“When we say people don’t know about us because of ignorance, it means we’re judging them. My faith does not teach me to judge others. They’re just not aware. We need to work on making people aware.”