You are at:Home»Current in Carmel»Carmel Community»Carmel’s Seema Verma eager to serve as administrator for Centers for Medicare and Medicaid Services

When President Donald Trump nominated Seema Verma to be the administrator for the Centers for Medicare and Medicaid Services, she knew it was something she was meant to do. 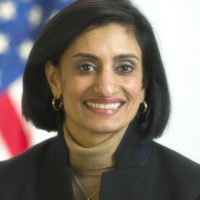 However, the Carmel resident said she had to consider her family’s needs.

“I have two kids, and my husband has his practice as well at the Indiana Health Group,” Verma said in an interview with Current before serving as a keynote speaker at the Lugar Series luncheon April 21 in Indianapolis. “The family considerations were important as to how it was going to work. We talked about it as a family and felt like it was the right thing to do. My kids and husband were very supportive of it. I feel blessed to have a family that understood that this was an important dream for me as well as important for our country.”

“It’s an honor and privilege to serve my country,” said Verma, who sold SVC, Inc., her health policy consulting firm, in March.

Verma said the confirmation process was a positive one.

Her children are Maya, 16, who attends Park Tudor School, and Sean, 13, who goes to Sycamore School. Her husband, Dr. Sanjay Mishra, is a child psychiatrist.

“There is a lot of phone calls and Skype in between,” Verma said. “I think we are doing a good job staying in touch. It’s important to me that my family is OK. We’re managing through it.”

Her two dogs, a goldendoodle and a cavachon, are taking her absence much harder.

“They see the suitcase and follow me to the door,” Verma said. “It’s hard on the dogs because you can’t call them and explain you’ll be back.”

The family moved to Carmel from Indianapolis in 2005.

“We’ve been in Indiana for 20 years,” Verma said. “When you are traveling you really appreciate home.”