A group of Indiana filmmakers is planning to shift Indiana’s film industry into overdrive  with the next “Power Rangers: Zenith,”  a re-telling of the “Green With Evil” story arc from the Mighty Morphin’ Power Rangers universe. The film is slated to release in October 2018. 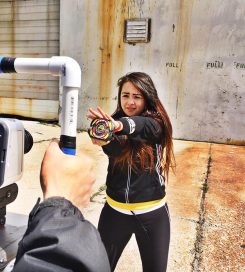 Ariel Noel on set as the Yellow Ranger. (Submitted photo)

Emmanuel Carter, co-creator for “Power Rangers: Zenith,” said the film was conceptualized at the beginning of 2015 and began filming at the end of 2016. Carter partnered with a group of filmmakers in the Indianapolis area to bring the concept to life.

“There is a veritable amount of talent here in Indiana, “ Carter said. “We decided, look, we need to band together to make something that’s going to make a big splash. We chose ‘Power Rangers’ because it’s something that we love, and we saw the potential.”

Among the Power Rangers team of Indiana natives is actor and writer Ransom Pugh, the co-creator for “Power Rangers: Zenith.” Pugh also co-stars in the film as the Red Ranger. Brandon Benz is taking on a dual role as director of photography and Blue Ranger. Actress Katie Harbridge will play the Pink Ranger and actress Ariel Noel plays the Yellow Ranger.

“My team is a confluence of people who have worked with one another on other films,” Carter said. “It’s really hard to find people here because many don’t try to pursue film opportunities in Indiana. A lot of the talent moves out to other states with more work opportunities.”

The Zenith team also banded together with even more film industry professionals to release a short film called “Catapult.” This film garnered support for Indiana House Bill 1219, which would establish the Indiana film and media production expenditure tax credit. “Catapult” advocates that the bill would encourage the increase of job creation, the generation of tax revenue and increase Indiana tourism.

Carter said that the term “zenith,” meaning the time at which something is most powerful or successful, represents the power behind this coming-of-age story. “Zenith” takes place right after the Power Rangers reach teen-hood.

“It’s very raw and new,” Carter said. “They are trying to balance life as superheroes and life as teenagers. We wanted to show that anybody can rise up and take a stand.”

Many gender and racial stereotypes have been turned on their head in this Power Rangers interpretation. Kimberly, the Pink Ranger, was traditionally stereotyped as a hyper-feminine, ditzy cheerleader. In “Zenith,” she is is portrayed as an intrepid and intelligent young woman.

“Because we are trying to stick so close to the blueprint of the original show, we kept the rangers with their original colors. But we changed their personalities a bit,” Carter said.

Zach, the Black Ranger, could dance and rap but was not a good student in the original series.

“It’s sad because you’re painting that picture for an entire generation,” Carter said. “You’re not bound to your race. Instead of making the black ranger the ‘hip hop one,’ he is not athletic (in “Zenith”). He comes from a wealthy family but is still humble.”

Carter, a Carmel resident and Indianapolis native, said that much of “Zenith”has been  filmed in Carmel.

“The city of Carmel has been really dope to us when filming this project,” Carter said. “Carmel has so many beautiful locations. It will be cool to showcase that on such a big platform.”

For more information and to follow the making of “Power Rangers: Zenith,” visit facebook.com/PowerRangersZenith.