You are at:Home»Current in Carmel»Carmel Community»No business owners at meeting object to planned 96th St. roundabouts

The City of Carmel is proceeding with the transformation of seven 96th Street intersections into roundabouts, including Keystone Parkway. 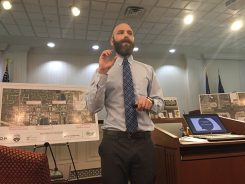 Josh Kirsh of the Carmel Planning Dept. speaks at a March 28 meeting to provide information about roundabouts coming to 96th Street intersections. (Photo by Adam Aasen)

Because 96th Street is the border between Indianapolis and Carmel, Christine Scales, an Indianapolis City County Councilor for that area, has voiced opposition to four of the seven roundabouts: Hazel Dell Parkway, Gray Road, Delegates Row and Randall Drive. She claims that business owners don’t want the roundabouts because construction will keep customers away and when completed, drivers will move quickly through the intersections and not check out the area businesses.

But at a widely advertised public meeting March 28, no businesses showed up at Carmel City Hall to remonstrate.

Josh Kirsh, who works for Carmel’s planning department, said he’s been on a foot campaign, walking door-to-door to meet with each business along the 96th Street corridor to explain the project.  None have complained, he said.

“What I’m hearing from these business owners is excitement,” Kirsh said.

Kirsh said business owners tell him the roundabouts will boost business because traffic backs up so much that some people avoid the area.

Current in Carmel reached out to several businesses but couldn’t find any who expressed anger about the roundabouts.

Some roundabouts might cut into parking spaces for businesses, most notably Scotty’s Brewhouse, but City Engineer Jeremy Kashman said plans have been tweaked to reduce impact on businesses.

Scales, who was not at the March 28 meeting, said the problem with roundabouts is people don’t stop like they do at stoplights and notice new businesses. Kashman said there’s no proof traffic backups help businesses.

“We haven’t seen any data to back that up,” Kashman said. “As people can move through the corridor it becomes more visible. I’m a person that if I’m going to sit and wait, then I’d avoid that area.”

Scales said many businesses are opposed to the roundabouts. She declined to give names because the business owners did not want to be quoted in the newspaper.

“I went to great effort to contact business owners leasing their retail or commercial office space and will reiterate that each respondent to my questions was opposed to the roundabouts and feared their business would not survive through the construction period,” she said in an email.

Carmel Mayor Jim Brainard said he’s received no complaints. He said any complaints about 96th Street roundabouts came many years ago, and those business owners have since changed their minds because they’ve seen how roundabouts work.

Carmel firefighter Tim Griffin said roundabouts are safer because they reduce the likelihood of head-on collisions. As a result, Carmel no longer needs a “jaws of life” for accidents.

“It’s really phenomenal to see the massive decrease in accidents,” Griffin said. “I see the safety of roundabouts, and I want every intersection to be that because I’m going to have five daughters out on the road, and I want them to be safe.”