You are at:Home»Current in Carmel»Carmel Community»Drone Club takes flight before school at Towne Meadow 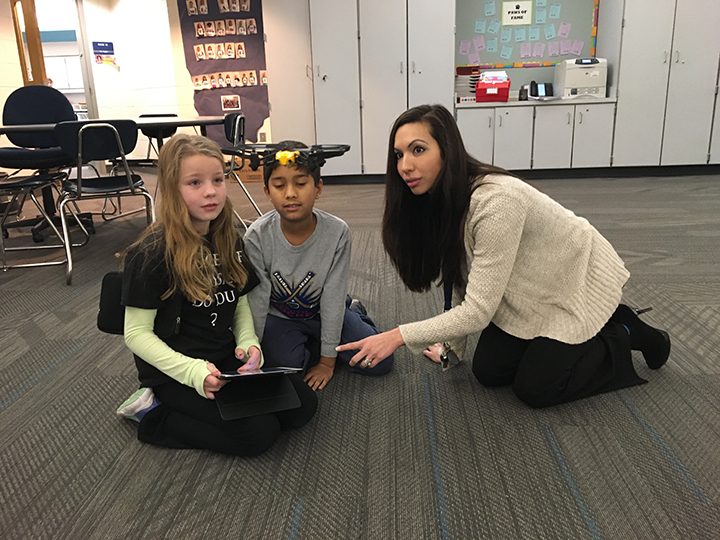 Josie McKay works with students in the Drone Club. (Photo by Kyle Schulenborg)

As far as toys go, drones are all the rage for kids these days. With that in mind, Josie McKay, a fourth-grade teacher at Carmel’s Towne Meadow Elementary School, is incorporating them into the classroom. Earlier this year, McKay won a drone in a contest on Twitter and wanted to use it with her students.

“Since there was only one and I have 26 kids, I thought the best way to utilize it and not take away from classroom time would be to make an extra-curricular activity,” she said.

In January, the Drone Club came to fruition, comprised of seven of McKay’s students, who meet every Tuesday for 30 minutes before school.

McKay doesn’t teach a lesson during each Drone Club meeting; rather, she lets students open the drone’s corresponding coding program and decide what they want the drone to do.

“Then they figure it out, they code it and test that out and see if it works. And if it doesn’t, they tweak it and fix it,” she said. “It shows great initiative, great teamwork. It’s showing leadership skills. They’re taking direction from the students, but they also lead the small group.”

In addition to these valuable skills, McKay has seen the students develop interests in computer science and computer programming. Watching their enthusiasm grow, it’s easy for McKay to see the benefits.

“I just think that it’s opened up that eye that coding is not just computer programming,” she said. “They can do other stuff with it, and they are just more excited to come to school. They not only want to code the drone in Drone Club, they want to (code it) when they’re finished with their work.”

Given how excited the students are about the club and the interests created through it, McKay wants to make it a long-term option.

“As long as my drone doesn’t break, I’ll do it,” McKay said, laughing.