Naturally, Bob Shea wants to promote his books on his school visits, but his real mission is to promote reading, period. 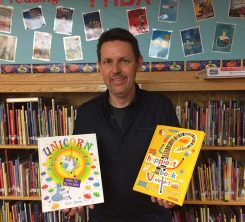 “I only write funny books, and I want kids to think reading is fun and something they look forward to doing and not something they have to do,” Shea said. “I try to make the whole experience as entertaining as possible.”

College Wood librarian Ann DiBella contacted Shea, who is based in Connecticut, in 2016 to check his schedule for this year. She helped set up visits with other Carmel schools: West Clay, Mohawk Trails, Prairie Trace and Forest Dale.

“The more we can make authors and illustrators feel like just normal people, a lot of times the more kids will feel like they are able to do that job as well, to be able to be illustrators and authors, too,” DiBella said.

DiBella said she had other teacher friends around the nation highly recommend Shea.

During his College Wood visit with kindergarteners March 21, Shea had individual students help him draw a cat, a dinosaur and unicorn.

Shea said he travels a few weeks out of each year in the spring to visit schools. His books are mostly geared toward pre-kindergarteners to eight-year-olds.

“When I talk to older kids, say fifth-graders, it’s all about process of writing and all the revisions I have to do and all the work that goes into it,” Shea said. “For the little kids, I read and draw and joke around.”

Sometimes, Shea tests his humor out on the children to see what might work in books.

“I can tell what kids react to and what they like,” he said.

Shea’s first book came out in 2007. Prior to that, he was a graphic designer and art director. Shea designed the PBS Kids logo.