You are at:Home»Current in Fishers»Fishers resident Vanderbosch gets full-ride Evans Scholarship

What started as a summer job as a caddie for Hannah Vanderbosch has transformed into a full scholarship. 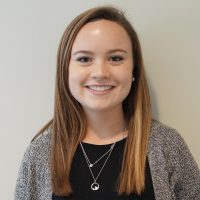 Vanderbosch, a Cathedral High School senior and Fishers resident, is one of 14 Indiana high school seniors to be award the Evans Scholarship, a full, four-year housing and tuition scholarship. She had the in-person interview at Long Beach Country Club in Michigan City. She previously had submitted an application, an essay and letter of recommendations. Vanderbosch, 18, will attend Purdue University to major in computer science and minor in ceramics.

The criteria include a strong caddie record, excellent academics, demonstrated financial need and outstanding character. It’s a one-year scholarship that is renewable four times as long as the students keep up their GPA. Vanderbosch has a 3.8 GPA.

Vanderbosch, who played four seasons of golf at Cathedral, began caddying before her sophomore year. She learned about the caddie program at Prairie View Golf Club through the Cathedral newsletter.

“I wasn’t thinking scholarship-wise, I was thinking of a summer job,” Vanderbosch said. “About my junior year, I thought I could do this for a scholarship.”

The interview is to prove that the caddie has worked hard enough for the scholarship.

“I was still scared,” Vanderbosch said. “They make you wait that one week after the interview.”

Vanderbosch, who was the only female caddie at her club, said her favorite part of caddying was meeting people. When she started, she said she was shy.

“Just being with a complete stranger for four hours in a round, you learn a lot about them,” she said. “I’ve gotten a lot better with people skills. Some of their stories are pretty funny.”

Vanderbosch started playing golf before her freshman year at Cathedral. Her older sister, Katie, also played for the high school.

“When my sister was playing, I never wanted to play,” Vanderbosch said. “I didn’t like watching it. I thought it was boring. Once I actually was able to play, I liked it.”

As an Evans Scholar, she will live in a house with other members. To pay for their food and earn a little extra money, the Scholars wait tables at fraternities and sororities.