You are at:Home»Current in Fishers»Fishers Police Department talks community with kids 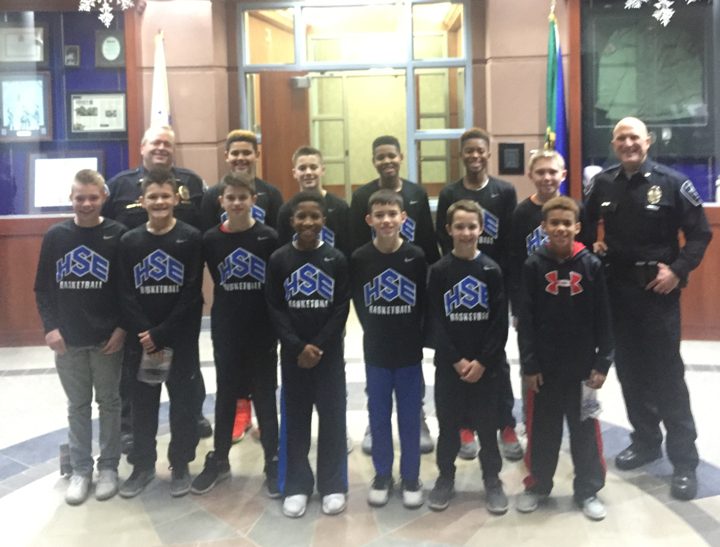 Fishers Police Dept. recently met with fifth and sixth grade boys travel basketball teams to discuss community issues. It all started with Fishers’ parent Tommalisa Lumpkin. She met with FPD in the fall to discuss race relations in the community. She got to thinking it might be a good idea for her boys to meet with them, as well.

“I hadn’t had a chance to meet our Fishers police officers, but I knew two things. One, growing up as a little girl, I always had really fond memories of police officers. Two, I know that Fishers was the second safest community in the U.S.,” Lumpkin said. “In the back of my mind, I was thinking, ‘Our guys rock,’ and no one is talking about it. That was kind of where this evolved.”

As fate would have it, her husband was coaching two boys basketball teams. Lumpkin reached out to FPD Chief Mitch Thompson. A meeting was set up for the boys.

“That night it really wasn’t agenda-driven other than to let them get to know some of the things we do as an agency,” Thompson said. “So, we talked about with the students what the FPD has to offer in the community and why safety is important to us. We did a tour of the police station, which I think was a lot of fun for them.”

The boys did, in fact, enjoy the tour, but asked the officers serious questions.

“Quite interestingly, a couple of them asked how we felt or what did we take out of the recent attitude toward police, and do people have the right to protest,” Thompson said. “We answered all their questions. It took over an hour and a half, mainly because of the insightful questions the kids asked.”

Lumpkin and Thompson want Fishers residents to know about all the programs FPD offers the community. For more, visit fishers.in.us/police.