You are at:Home»Current in Zionsville»Mice on a mission: Zionsville researcher sending 40 rodents into space to study bone healing 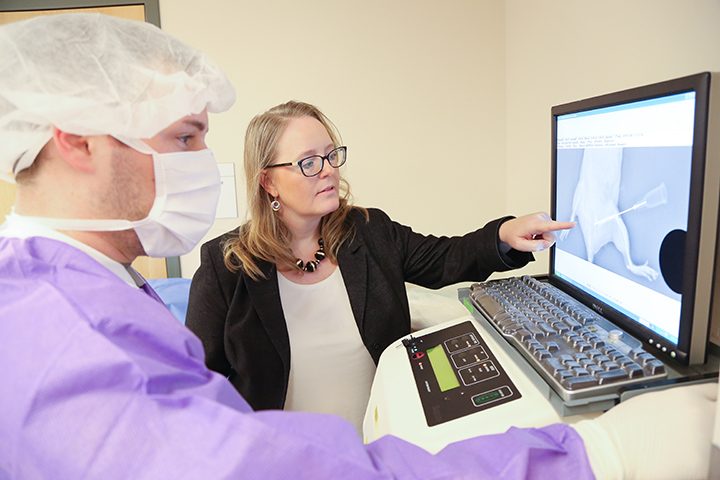 Undergraduate student Alex Brinker, left, and Melissa Kacena look at an X- ray of a mouse as they prepare to send 40 mice into space for research. (Photo by Ann Marie Shambaugh)

When soldiers are injured in modern warfare, they often face devastating damage to their extremities from improvised explosive devices or similar weapons. They face a long, painful road to recovery – if they can avoid amputation.

Dr. Melissa Kacena is confident she can help. And she’s sending 40 mice into space to prove it.

The associate professor of orthopaedic surgery at the IU School of Medicine has been working with NASA and the military since 2013 on a research project to test a new bone healing agent that she believes could work wonders for people suffering from traumatic bone injuries. But to test it effectively, she needs to get rid of gravity. 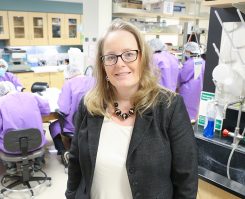 Melissa Kacena of Ziosnville is leading a research project that will send 40 mice into space to study bone healing. (Photo by Ann Marie Shambaugh)

After years of delays and navigating red tape, Kacena, a Zionsville resident, and her team are preparing to launch 40 male mice with broken femurs into space Feb. 14 aboard a SpaceX rocket. SpaceX is a privately-owned company that designs and launches spacecraft with a long-term goal to enable humans to live on other planets.

Previous treatments have shown great promise in animal trials but came up empty when tried on humans. Kacena believes it’s because they are most effective when the patient bears weight on the bone as it heals. The trial animals are able to be up and running around with a severely damaged femur almost immediately after the damage occurs. People are not.

“Humans are going to have no weight-bearing for quite awhile,” Kacena said. “So if we could test these drugs up in space where there’s no weight-bearing, that would allow us to understand better if (the treatments) really will work in humans.”

As a child growing up in Colorado, Kacena had dreams of becoming an astronaut. She studied aerospace engineering as an undergraduate and as she worked on advanced degrees, she designed spaceflight hardware for biologic application as a doctorate student. Her studies included bacterial and bone cell growth in spaceflight, and some of her research flew on space shuttle missions.

Eventually her focus turned to orthopaedics, and she thought her days of space research were over. But that changed in August 2013 when the U.S. Army approached her about leading a research team for the bone healing in space project. She had the perfect background for the job.

“Having an opportunity to do spaceflight research again brought my research full circle,” she said. “I hadn’t been doing it, and it’s a lot of work, a lot of hurdles.”

The project is already more than two years behind schedule. It suffered a major delay when a SpaceX rocket exploded in June 2015 and again when an explosion occurred during fueling for a pre-flight test in September 2016. Kacena and her team have become familiar with adjusting their schedules again and again, which hasn’t been easy for a group comprised mostly of students with full schedules and many responsibilities.

But after years of work, the team of 20 traveled to Cape Canaveral in early February. The students paid their own way, which Kacena said shows their dedication to the project, and she’s set up a fundraising page at orthopaedics.medicine.iu.edu/bonehealingspace/giving/ to help defray some of their costs.

Post-doctoral fellow Paul Childress has been involved from the beginning. He said one of the biggest lessons he’s learned through the project is patience. But it’s been worth the wait.

“The chance to work with NASA and SpaceX is a once-in-a-lifetime opportunity. It is exciting to think about my research orbiting the earth,” he said. “As a bone biologist I recognize the urgent need for better treatments to help severe fractures heal quicker and more completely. These injuries can be life-altering, and far too often result in someone losing mobility and the ability to live independently. We all get a strong sense of accomplishment by researching new ways to help these patients.”

As the launch date draws near, Kacena knows it could be delayed once again by weather or other factors out of her control. And once the launch does happen, the mice will be under the care of astronauts who are running approximately 100 experiments for other researchers at the same time.

But if all goes well, she said the results could make a big difference for those facing bone loss – on Earth and beyond. Astronauts in space lose approximately 1 percent of their bone density each month, which is a big problem on long space flights.

“We hope that we’ll learn a lot from this and about bone healing in general, because if we decide to go to Mars, with current technology it will take about three years,” she said.

The mice will be in space for about 30 days before being euthanized. Live animals are not permitted to return to Earth because of hardware limitations and timing issues. Kacena said she expects these restrictions to change within a year.

Once the samples have returned, the researchers expect to spend several months analyzing them. Kacena is eager to see the results, both on the mice and on the future careers of her research team.

“I’m in a university because I like the mentorship of students,” she said. “Having them experience this will be another really important success.” 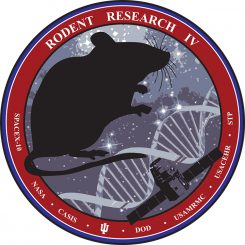 The researchers will carefully select 40 male mice to make the trip to space. They’re looking for rodents who get along well, are able to handle pre-flight tests and easily eat and drink from specially designed spaceflight dispensers.

During their trip, they’ll live in two pieces of hardware called transporters. Each transporter has two cages that hold 10 mice each. Unhampered by gravity, they’ll float around in their cages and have special compartments for resting and several items they can grab for support.

The research team is setting three precedents with their mice. This will be the first time: