While the many hues of “Joseph and the Amazing Technicolor Dreamcoat” are being celebrated nightly on the Beef & Boards Dinner Theatre stage, the mood changes to all things pink on Friday and Saturday mornings and afternoons when the Pyramid Players present “Pinkalicious the Musical” Feb. 17 through March 18. 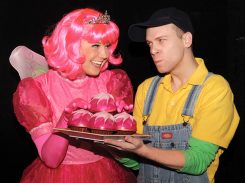 The musical, which has played Off-Broadway since 2007 and throughout the U.S., draws a young, mostly preteen female audience (although boys are welcome) that shows up in their very best pink attire.

“It’s a sea of kids in pink,” said Danny Kingston, a 2006 Westfield High School graduate. “It’s adorable. And in the show I get to sing to boys that it’s OK to like the color pink, too.”

The musical is based on the “Pinkalicious” book series written and illustrated by sisters Elizabeth and Victoria Kann. The stories center on a girl named Pinkalicious, who, as her name implies, is obsessed with all things pink, whether they are at school, home or outdoors.

After over-indulging in pink cupcakes, Pinkalicious, played by Jaddy Ciucci, wakes up one day pink and is thrilled. While continuing to eat pink cupcakes, however, she develops “pink eye pinkititis” and can only see the color pink. Wishing to fix the ailment, she follows the doctor’s order to eat green food and is transformed back to normal.

“The message the show conveys is acceptance,” Kingston said. “Oh, and of course, eat your greens!”

Kingston is reprising the role of Pinkalicious’s brother, Peter, after first playing him in 2013

“It makes it more fun this time around,” said Kingston, whose B & B credits include Jack in “Into the Woods” and Lefou in “Beauty and the Beast. “I know him and his quirks already. It’s like hanging out with an old friend.”

Performances are at 10 a.m. Fridays and at 10 a.m. and 1 p.m. Saturdays and are one hour in length. For more information and show schedule, visit beefandboards.com.