You are at:Home»Current in Westfield»A ‘little’ piece of Africa: Sulcata tortoise finds home at county park, cared for by Westfield woman 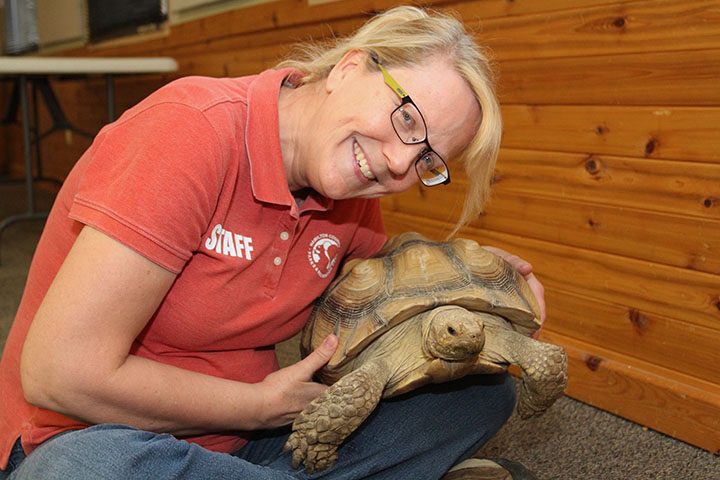 When he arrived as a stray, Chumley weighed seven pounds. He was found wandering the streets of Broad Ripple in the middle of January more than a decade ago. Chumley, however, isn’t a traditional pet. The now 27-pound sulcata tortoise, native to African savannahs, has done quite well since he was found malnourished and sickened with pinworm in 2004.

Interpreter of Natural Resources Holly Faust has been Chumley’s caregiver since 2007. She said it’s a wonder the tortoise didn’t freeze to death. Ideal temperatures for the African tortoise are between 70 and 90 degrees Fahrenheit.

“He was found (in Broad Ripple) by a woman and then given to another woman, and she knew to call us,” said Faust, who works at Cool Creek Park and Nature Center. “He was, from my understanding, wandering the streets. Here we are 13 years later, and he’s grown, he’s doing well.” 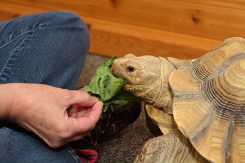 Chumley, christened after a popular bar in Broad Ripple, is doing well. He has gained 20 pounds at Cool Creek but suffers from “pyramiding” from his time spent on the streets. Although not life-threatening, pyramiding is when the scoots of the shell form pyramids instead of being smooth — a result of malnourishment.

As his caregiver, Faust preps Chumely’s food, feeds and looks after him. During her 10 years at Cool Creek, Faust has never taken Chumley to her Westfield home. She said he has gone on plenty of field trips, though, including visiting kids at a Touch-a-Truck event, visiting schools, Cool Creek summer concerts and to a juvenile detention center. Chumley rides in a wagon during his field trips.

Fast said most likely, Chumley became bored with his previous owner and dug his way out of his confinement.

“People that don’t know what they’re doing think (sulcata tortoises) are cute. They’re pretty little when you first get them,” Faust said. “Pet stores don’t always tell the whole story, and the fault is also on the customer. (Reptiles) are not like a dog or a cat. They can’t really express themselves to let you know they’re hungry or you’re neglecting them. If (sulcatas) are bored and have nothing else to do, they keep going (digging) and going until they get out. Animals all have different habits and what they do when they get bored. Chumley has to have attention every single day. He gets fed, and I like to once in a while hand feed him.”

Chumley eats timothy and orchard hay with calcium powder and reptile vitamins for meals, but he enjoys sweet potatoes, collard greens and squash as snacks. Faust said preschool-aged children are especially drawn to Chumley. Some even come to the park to hand-feed him. 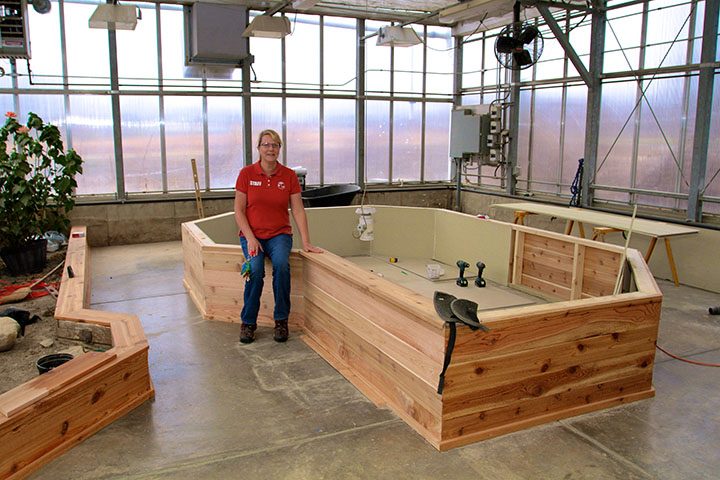 A NEW HOME FOR CHUMLEY

Cool Creek Park and Nature Center is in the process of constructing a new corral for Chumley, a 27-pound sulcata tortoise. The corral is inside the greenhouse, where native plants also are sold. His new corral will be larger and in the middle of the greenhouse. Half of the corral has heated flooring, and he also will have a hut to go to if he needs privacy. Chumley also spends time in the nature center auditorium, and there is an outdoor corral for when the temperatures are warm enough.