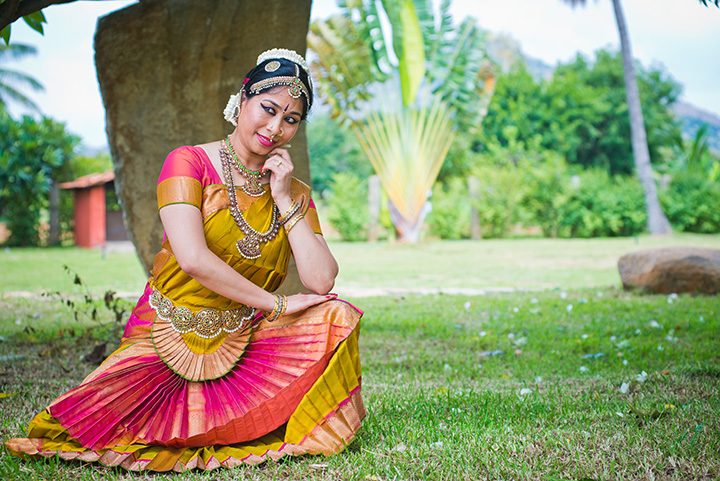 Mangala Anand is the founder of the Nrithya Bharathi Institute of Dance in Carmel. (Submitted photo)

The art of Bharatanatyam has its roots in ancient India, but it’s alive and well in Carmel thanks to the efforts of choreographer Mangala Anand.

Born in Bangalore, India, Anand began learning how to dance Bharatanatyam – a classical Indian dance form – at age 7. Shortly after moving to Carmel in 2008 for her husband’s job, she founded the Nrithya Bharathi Institute of Dance, where she also serves as artistic director. 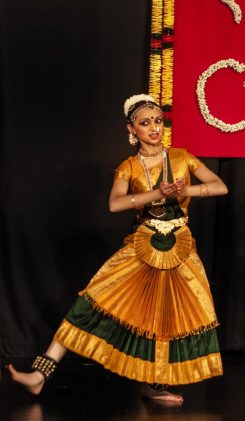 A student of Mangala Anand’s at the Nrithya Bharathi Institute of Dance, Niyana Vashisht has been studying with Anand for the past seven years, since she was 11 years old. (Submitted photo)

Bharatanatyam originated in Hindu temples more than 2,000 years ago and is the oldest dance form in India. Anand studied under Guru Padmini Ramachandran and Guru B. Bhanumati, both accomplished and award-winning gurus in India. Anand’s current mentor is Nithyakalyani Vaidhyanathan.

Dance critics in India have published rave reviews of Anand’s work, citing her remarkable face mobility, un-wilting nature, discipline and Abhinaya, a Vedic term referring to the art of expression that includes the limbs, speech, scene and inner emotions of the performer to the audience. More precisely, Abhinaya means “leading an audience toward.”

Bharatanatyam serves up an intricate array of metered and measured steps, emotional expressions, dramatic gestures and lavish and colorful costumes.

Along with her training, Anand has extensively studied the Natya Shashtra, which is like the Bible for dancing and the performing arts in India, she said. Written in the second century, the text has survived and continues to serve as the authoritative text on dancing and the performing arts in India. The Natya Shashtra describes not only the correct steps and techniques but also specifically prescribes the correct qualifications for a dancer and a performance, including body type, make-up, goals, stage location, music, ensemble and all of the basic qualities a dancer should possess.

Anand said although a few things have changed with the centuries-old art form, the divinity and legendary stories have remained the same.

“It was protected and passed on,” Anand said. “And we should pass it on in its true spirit to the next generation.”

Anand trains 30 students at her dance institute that she runs out of her west Carmel home. Her goal is to provide a holistic experience for students and to contribute to the cultural vibrancy of Carmel.

“I always had this strong feeling that imparting knowledge is good,” Anand said. “You’re trying to preserve and pass this on.”

Niyana Vashisht has studied with Anand for the past seven years.

“(Anand) really helped me explore my potential as a dancer and has given me so many platforms so that I can showcase the art,” Vashisht said.

Because of the heavy training, discipline and focus involved, Anand said that Bharatanatyam is the main focus of all of her students. She believes that in a world where things move quickly and attention spans are growing shorter, it is beneficial to let a child be nurtured and flourish in one major discipline rather than be pulled in several different directions.

“There’s only so much bandwidth everyone has,” she said.

In 2013, Anand started her own dance festival, Ranga Shankaraa, held at the Tarkington to help spread awareness for Bharatanatyam. The next one is planned for April 2018.

“Awareness is such a big factor in keeping the arts alive today,” Anand said.

Anand also has connected with the Center for the Performing Arts to teach during their Dance Discovery series, which offers exploratory programs that help propagate different dance art forms. Last October, Anand premiered her own work, “Leela,” at The Tarkington. She plans to begin a “Leela” tour across India in the summer and throughout the U.S. and Canada in the fall. 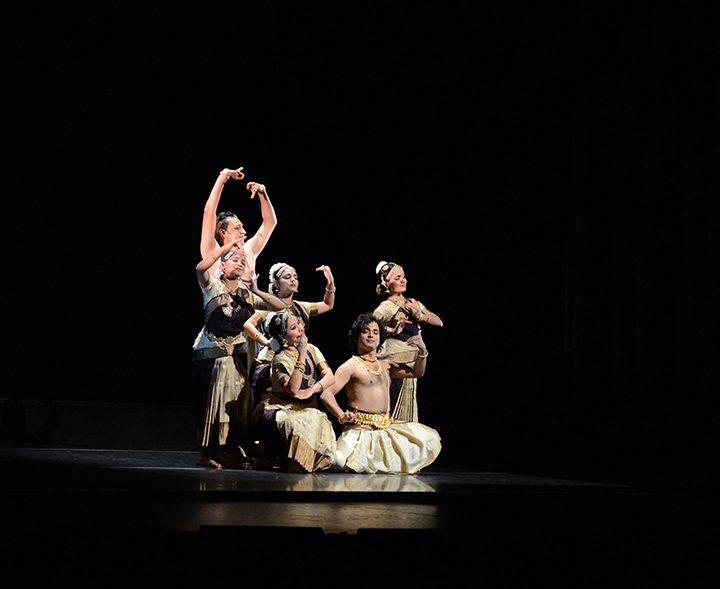 Anand said she was lucky. Her aspirations just happened to follow the footsteps of her mother’s unfulfilled dreams to become a dancer herself.

“Whatever I am today as a performer, as a dancer, is all because of my mom,” she said.

The main goal of Bharatanatyam is to transport and bring joyful consciousness to the audience members.

Anand said she believes in progressing social wellness through the arts. To Anand, social wellness means positive minds, positive vibrations, always building a healthy society and imparting knowledge to the next generation.

Contribution, community and the cosmos

Anand said as a performer, her goal is to contribute her artistic work however she can and present the ancient art of Bharatanatyam to a diverse crowd rather than confining the art form to a particular community.

“Art just transcends everything,” she said. “It’s such a universal concept.”

Anand said her premiere of “Leela” at the Center for the Performing Arts was met with appreciation and was a celebration of diversity.

“All of us are dancers. The whole cosmos, the world is the stage,” she said. “We are performing. We are dancing, and there is music everywhere in everything.”