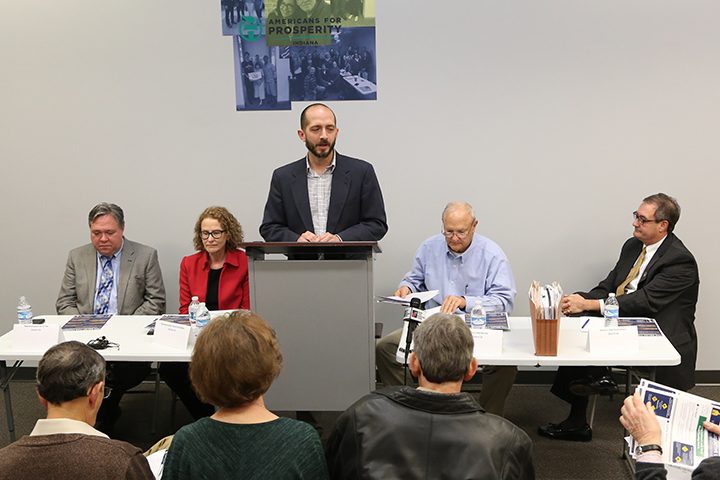 Four Republican state lawmakers explained why they are in favor of increasing the state gas tax at a town-hall style meeting Jan. 26 in Carmel.

State senators Luke Kenley and John Ruckelshaus and state representatives Donna Schaibley and Jerry Torr gathered at the Carmel headquarters of Americans for Prosperity, a conservative advocacy group known for opposing tax increases, to answer questions and share why they believe a tax hike is necessary.

State representatives have proposed House Bill 1002, which would increase the gas tax by 10 cents per gallon and cap additional annual increases at 1 cent per gallon.

The state gas tax is currently 18 cents per gallon. Without action, Indiana will have a $1 billion annual road funding deficit over the next 20 years, according to Kenley and Ruckelshaus.

Kenley, a 25-year senate veteran, said he ran for re-election in 2016 in part because he believes finding a solution for long-term road funding is “so important.”

“Indiana cannot afford not to do this and do it right,” he said. “Our economy depends on good roads. We are the Crossroads of America.”

AFP opposes an increase in the gas tax. It advocates instead for all gas tax revenues to be spent on roads and bridges, freezing state spending and using a projected $1 billion tax revenue increase to pay for road repairs.

“The feel around the state is if we know that this revenue is going to roads, then we would be willing to pay a little bit more,” said AFP State Director Justin Stevens before introducing the lawmakers. “That’s the sentiment I’m getting, but that’s not currently what’s happening.”

Kenley said he’s hesitant to commit all gas taxes to road and bridge repairs because the state would have to find ways to pay for other needs currently funded in part through the gas tax, and that would likely lead to another tax increase down the road. Torr agreed.

“Sales tax is a broad tax, just like income tax, and if you do decide you’re going to dedicate 100 percent of that sales tax on gasoline to roads, that’s fine, except somewhere you’ve got to make it up,” Torr said. “It’s really easy to say that we can cut spending, but we have a very lean budget in Indiana.”

“I firmly believe the people who are using the roads should be paying for them,” she said.

Not everyone in the audience agreed.

Melba Kiser of Noblesville said a gas tax hike is unfair to people like her husband, whose jobs require that they spend much of their time on the road.

“The decision to drive is not an option. It’s a necessity,” she said. “There are many people with modest incomes who have to drive long distances in order to make a living. … It is a significant burden on someone who is at a medium to low income.”