Sydney Pinchouck is only 9 years old, but she’s already familiar with Beef & Boards Dinner Theatre’s stage, where she will perform through Feb. 19. 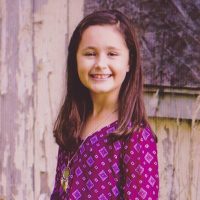 The fourth grader from Fishers, who attends Holy Cross Lutheran School, made her debut at the theatre two months ago as Belinda Cratchit in Charles Dickens’ classic, “A Christmas Carol.”

“I have always wanted to perform at Beef & Boards since I started performing,” she stated.

Now, she adds a new credit: a member of the children’s choir in “Joseph and the Amazing Technicolor Dreamcoat.”

“’Joseph’ is a new show for me,” she stated. “I’m excited to learn the music and take part in it.”

Pinchouck said learning the notes to new songs is the most difficult part about being in a show.

When she’s not on stage, Pinchouck enjoys math, figure skating and reading – particularly “Percy Jackson,” “The Land of Stories” and “Harry Potter.” She wants to someday become an actress or a teacher.

Three children’s choirs are featured in “Joseph and the Amazing Technicolor Dreamcoat” at Beef & Boards. Each choir will perform for about two weeks of the production. Pinchouck is part of the Blue Choir, which opens the show. She is the daughter of Marc and Holly Pinchouck.