You are at:Home»Current in Fishers»Andritsch turns to drums for healing, encourages others to play 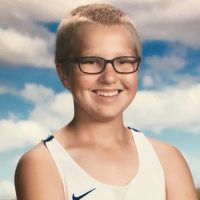 One Fishers family took their worst nightmare, their son’s cancer diagnosis, and turned it into a way for other families in similar situations to cope. Vicky Andritsch’s son, Luke, was diagnosed with acute lymphoblastic leukemia when he was 3 years old.

“He was given a three-and-a-half-year treatment plan. He received chemo every day for the next three-and-a-half years. He had oral chemo, spinal taps and bone marrow infusions,” Vicky said.

Chemotherapy is strong enough to kill cancer cells, but it also takes a toll on healthy cells in the body. Luke often had little energy to walk, and even resorted to crawling. He discovered one thing he could do without exerting himself.

“In his last year of treatment, we discovered his love of playing the bongos. When he would play, his eyes would light up. He wasn’t able to be out playing on the soccer field or jungle gyms, but I thought he could sit and hand drum,” Vicky said.

After Luke’s first lesson at Bongo Boy Music School, the 5-year-old told his mom about a special wish.

“As a mom, I will never forget this. I could see him in my rearview mirror, and his little cheeks were full from the steroids,” Vicky said. “I remember him saying to me that he wanted the sick kids that were still in the hospital to feel the way he felt when he played music. I said ‘OK, let’s do it.’”

After  Luke’s final year of treatment, the family formulated a plan. Team Luke was created. The family created rhythm packs. Each pack contains percussion instruments, DVDs and a Team Luke medal. They raise funds to create the packs and donate money to help find a cure.

“There is so much healing that goes into playing an instrument like the drums. It’s such a gift for us because you can see these patients forget about the impending surgeries or treatments,” Vicky said.