You are at:Home»Current in Carmel»Carmel Community»Neighbors concerned about look, density of proposed Clay Corner development 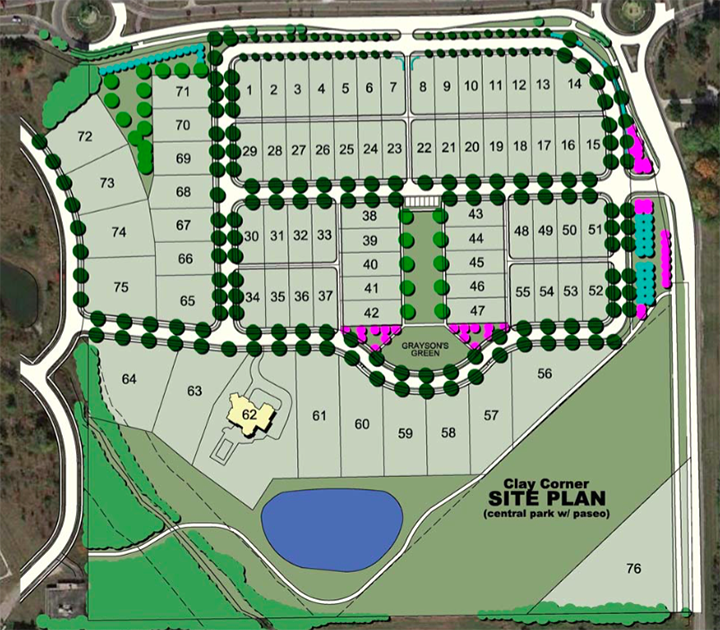 Clay Corner is proposed to have 76 lots on 34.5 acres at the southwest corner of Main Street and Clay Center Road. (Submitted photo)

Many residents in West Clay are expressing opposition to a proposed housing development at W. Main Street and Clay Center Road that would include 76 lot on 34.5 acres, which some say is too dense.

At least 48 letters of remonstrance have been sent to the Carmel Plan Commission, including one from Indianapolis Colts owner Jim Irsay. Remonstrators say the development will make traffic a nightmare and that the design isn’t consistent with the surrounding area.

“In my opinion, the developer is using a tasteless design with zero common area and jamming in too many homes in a condensed area,” writes West Clay resident Mike Schankerman.

Originally called the “East Village,” the project was renamed after neighbors said it was trying to piggyback off the appeal of the Village of West Clay. Now called Clay Corner, this planned unit development has gone through many changes, including relocating park areas and reducing the number of lots by one. There were also concessions with regard to tree preservation and changing of access points.

The changes come after a representative of the developers, Village Lots LLC and Wedgewood Building Co., met with Carmel Mayor Jim Brainard.

The development is now being considered by the land use committee of the Carmel City Council and will be held there until new committee members can familiarize themselves with the project, said committee chair Bruce Kimball.

Most of the objections from neighbors that say adding such a dense project will negatively affect traffic at the Main Street and Clay Center Road roundabout.

“If the project is permitted to proceed as currently planned, ingress and egress to and from our home for my family and our guests would be, at best, an adventure, and at worst, a nightmare,” Irsay wrote in a letter to plan commission.

Others are concerned about how close it is to neighboring homes.

“We’re extremely concerned that the small size of the village lots are out of place and not a fit near the Estate Lot section of the Village,” West Clay resident Terry O’Brien writes. “The close proximity of these small village lots would have an immediate negative impact on the value of our new house … We purchased our house specifically because it backed up to an undeveloped nature preserve-like green space.”

Others wrote that doubling the density requirements outlined in the comprehensive plan is irresponsible.

“I continue to be concerned that the Master Plan for this area of West Carmel has been thrown out the window, but no one on the Carmel Plan Commission or City Council has been willing to admit it,” wrote Philip Martini.

Homes will be priced from $450,000 to $850,000 and could go higher for premium lots, according to plan commission documents.

Jim Shinaver, an attorney with Nelson and Frankenberger, who is representing the developer, said multiple meetings have been held to try to create the best product possible, and park areas were relocated to create a central internal park for the development. He said they’ve met with the Urban Forester to review the landscape plan and that architectural standards are the same as the Village of West Clay. A wilderness-style playground will be constructed with ropes and wood instead of a traditional plastic and metal playground, at the suggestion of Plan Commission member Josh Kirsh.

Shinaver points out that the intention is to mimic what is occurring in the surrounding areas and that originally the Village of West Clay was approved at 2.1 units per acre, not including 216 additional senior housing units and 43 village center lofts. He said city engineers are satisfied with the traffic impact of the project.

The City of Carmel’s Dept. of Community Services approved of the project, saying, “the proposed PUD and primary plat provides appropriate transition with the larger lots to the west; is well designed with a grid type street system, alleys, and sidewalks; provides appropriate vehicular and pedestrian connectivity; has a central park area and recreational trail; preserves existing trees; and has high architectural standards and homes fronting Main Street.”

The Plan Commission voted 6-4 to send a favorable recommendation to the City Council.

Carmel City Councilor Ron Carter said he thinks this project will get approved.

“These are the same things that people said about the Village of West Clay years ago, and those fears turned out to be unfounded,” he said.

Brainard told Current that this project has undergone some changes but he thinks it’ll be a positive addition.