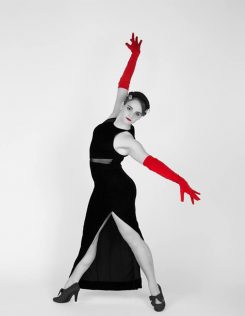 The Black Dahlia case is one of the most famous unsolved murders in U.S. history.

Elizabeth Short, nicknamed the Black Dahlia by newspapers, was brutally murdered in Los Angeles in 1947.

Gregory Hancock Dance Theatre audiences will take their crack at solving it when the theatre presents “The Black Dahlia” Feb. 4-19 at 329 Gradle Dr., Carmel. The six cabaret-style performances will be at 7 p.m. Saturdays and 3 p.m. Sundays. The production was created by founder/artistic director Gregory Hancock.

“We set up four scenarios that could have happened, we use some historical facts but took some artistic liberty, too,” Hancock said. “There’s not a lot of information about the crime and who could have done it. So we developed some scenarios and the audience gets to decide who it was. They have suspect cards on their table and they vote.”

Company dancer and teacher Hannah Brown, 25, will play the role of Short, who was 22 when she was murdered.

“I made the mistake of looking it up when I was eating lunch one day, I wouldn’t recommend it,” said Brown, referring to the gory details of her murder.  “I became fascinated with the unsolved mystery of it and how little is known about her life before her death. Lots of people confessed but they don’t think any of them actually did it and the most likely candidate they were closing in on died in a fire.”

There are some lighter moments.

“We like our emotional roller coasters here,” Brown said. “There are some fun moments. There is a little sister duet that is light-hearted. There are some sad moments and dark moments, too.”

Hancock said the music is different than what he would normally use.

“There is a lot of 1940s swing music and ‘40s Latin swing music,” he said. “There are a lot of fun and happy sections and almost comic sections. Then when it becomes dark, it becomes creepier.”

The production is the annual fundraising show, board president Ivy Heazeltine said. There will be a live auction with some original art.

Heazeltine said approximately one-third of the theatre’s revenue comes from ticket sales and the rest it has to raise.