You are at:Home»Current in Carmel»Carmel Business Local»Carmel-based J.C. Hart Co. to help develop Penrose on Mass 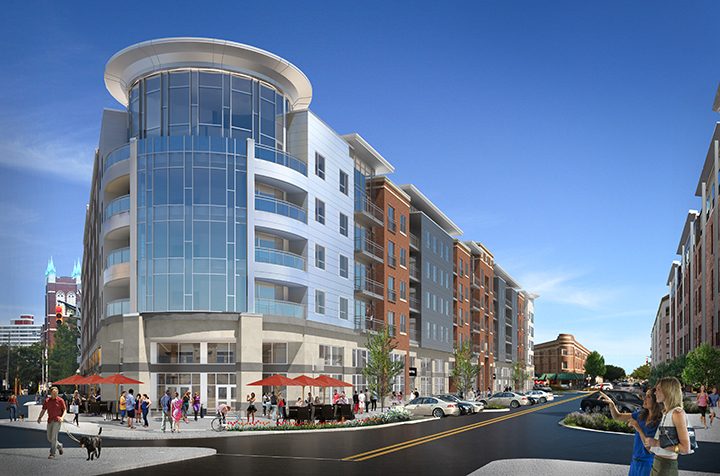 An artist rendering of Penrose on Mass, set to begin construction this month. (Submitted photo)

A Carmel company is playing a major role in Penrose on Mass, a downtown Indianapolis retail and apartment development.

“It’s one of the most high-profile projects we’ve done,” said Mark Juleen, vice president of marketing for J.C. Hart Co. “It’s in the heart of Mass Avenue and right next to the Old National Centre. There’s a lot of visibility there.”

The Carmel company celebrated its 40th anniversary in 2016.

“We’re doing the initial type of construction pieces right now,” Juleen said. “We’ll start doing some demolition at the end of the month.”

The process began more than five years ago when J.C. Hart put in a request for  proposal in October 2011.

“The main reason it took so long is it involved the fire station that was there, and the Red Cross and credit union were there,” Juleen said. “All those groups had to find new locations, and that took a lot of time.”

Juleen said Strongbox is the primary partner for commercial part of the project. There is 40,000 square feet of retail space, including stores and restaurants, on the main level. None of the retail tenants have been named yet, but Juleen said developers have letters of intent for about 50 percent of the space.

There will be 236 luxury apartments and a 379-space parking structure.

Juleen said the goal is to have some sort of an opening in late 2018.

“We might deliver it floor by floor,” Juleen said. “We think we’ll begin some operations by December 2018.”

“We’re excited about expanding our downtown footprint, for sure,” Juleen said.