Zionsville Community High School sophomore Kaija Kunttu recently competed for U17 Team USA in the inaugural Brogden Cup, held Dec. 30 to Jan. 1 in Tampa, Fla. Kunttu was the only female player from the Midwest selected to participate. 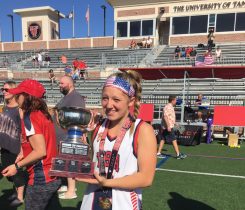 To qualify for Team USA, Kunttu played with Team Ohio in the Brine All-American Lacrosse National Classic last summer. Kunttu was the only player from Indiana selected to compete in the Brine National Championship.

Kunttu started playing competitive lacrosse  in first grade. She said she first played lacrosse in kindergarten and told her mom she wanted to pursue the sport.

“My love for it kind of grew from there, and I picked it up really fast and really enjoyed playing,” Kunttu said.

Kunttu started on the Zionsville varsity lacrosse team as a freshman. Her coach, David Elefante, said lacrosse is growing quickly in Indiana, with new teams being added each year.

“It’s another option for girls,” Elefante said. “It’s a really team-oriented sport that helps them build their confidence. It’s a great social environment for these girls.”

Kunttu said she was honored to be a part of Team USA.

“I just thought it was really amazing to be a part of the first women’s lacrosse Brogden Cup. It was just an honor,” Kunttu said. “It was just amazing making the friendships and being able to play with such good lacrosse players and being exposed to the new coaching and the new perspectives and the new ways to do things. I just thought it was so amazing.”