The Central Indiana Community Foundation selected four students from Hamilton County to receive a Lilly Endowment Community Scholarship covering tuition at any Indiana public or private university, and for the first time, two Westfield High School students were chosen for the scholarship. 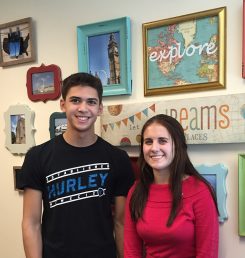 Justin Mamaril and Laura Galles were the two senior Westfield High School students that were both awarded a Lilly Endowment Community Scholarship. (Photo by Anna Skinner)

Following an extensive interview process with WHS counselors, a thorough application covering volunteerism, grade point average, financial need and more, and another interview process before a the CICF board, both Justin Mamaril and Laura Galles were chosen to receive the scholarship. WHS has had students receive the scholarship before, but never two in the same year.

“There’s only four per county chosen, so having two from Westfield has never happened before,” said Galles, who plans to study genetic biology.

Galles is active in youth group, student government and Best Buddies, as well as some other clubs. She also attends mission trips over the summer.

“There’s a big service component to it,” she said of the scholarship. “One of the conditions is that you stay involved in your community, in college and afterward.”

Mamaril said he plans to study human centered design and development and double-major in industrial design. He said that the scholarship lifts a weight off his shoulders in terms of finding a way to pay for college.

“It definitely opened up a lot of new doors,” he said.

A total of 142 Lilly Endowment Community Scholarships were awarded throughout the state. The other two Hamilton County recipients were Victoria Zetterberg of Sheridan High School and Yilin Dwyer of Noblesville High School.