You are at:Home»Current in Westfield»Chamber of commerce hosts Brooks, Schaibley and Brinegar to talk 2017 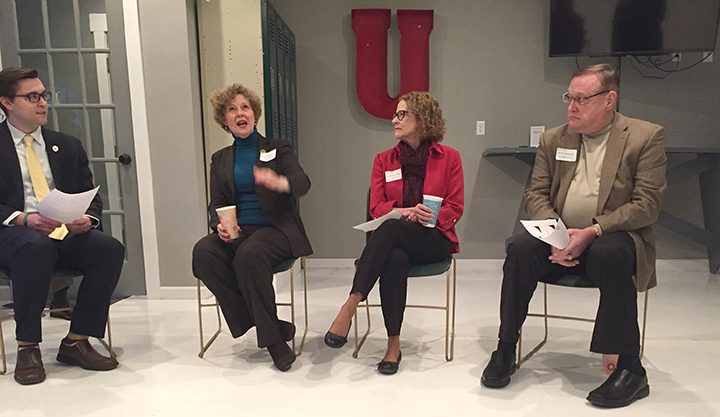 Brinegar spoke on eight top priorities for the chamber to focus on in 2017. The priorities, according to Brinegar, are “support establishing a long-term sustainable funding stream for roads and bridges, support the expansion of publicly funded preschool initiatives for children from low-income families, support suitable testing for students and accountability for all involved in the education process, support the comprehensive approach to decreasing the state’s smoking rate, support a statewide water policy to assure future resources and economic prosperity, support making technology innovation an integral part of the state’s identity, support maintaining and enhancing an attractive tax climate and support a work share program that will allow employers to maintain a skilled stable workforce during temporary downturns.”

“It’s a big difference between whether your child spent three years in a Methodist preschool before going to kindergarten versus some less-advantaged child that spent those same three years in grandma’s house,” Brinegar said on finding a way to fund preschool initiatives for disadvantaged families.

“I’m really excited for the coming session with the budget and major roads issues,” Schaibley said. “I’m looking forward to getting back to business down at the statehouse.”

On the federal level, Brooks spoke on the Trump administration’s focus on projects such as roads, bridges, dams and ports, and adding the administration is “preparing to move a lot of product” in reference to global trade.

“One thing we will start working on when we get back to (Washington) D.C. is repealing the Affordable Care Act,” Brooks said. “What we’re going to do is replace it and provide relief to families and businesses that are losing that insurance. The Affordable Care Act is going to go into a debt spiral. Premiums are spiking in March all across the county. The relief we are going to provide is going to take us a little bit of time, and we need to do it in a wise way (by) infusing competition and putting (insurance) back to a patient-centered health care.”