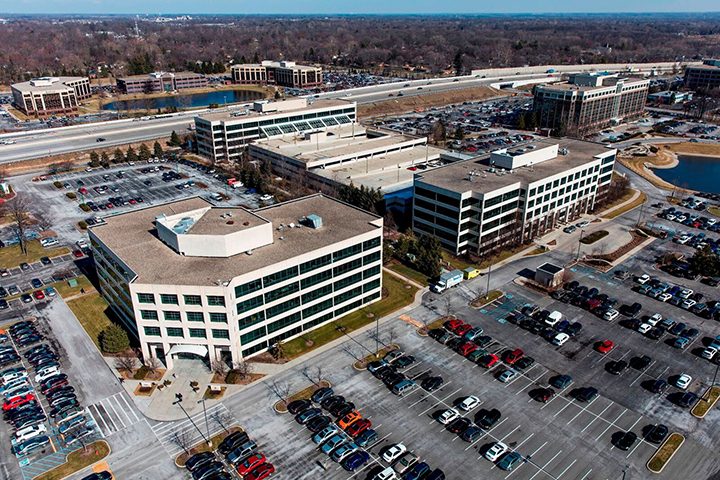 Parkwood Crossing is at 96th and Meridian streets. (Submitted photo)

As president of Indianapolis-based Strategic Capital Partners, Richard Horn’s primary focus is to expand acquisitions and development in the company’s targeted markets, including Indianapolis.

“We look for properties where we think if there is a vacancy, we can fill it,” Horn said. “If there is a need for expansion, we can solve it. If we’re buying at a time where the rents are more apt to go up and not down, that would include the business cycle that is unique to the sub-market that the property is. Is there additional land or ways to redevelop? Can you build an amenity center that will make tenants likely to stay? Those all are things we look at. Some investors will want a blue-chip property that is nice, new and shiny and has great tenants in it. They’re happy to get a safe, secure investment. We look for investments where we can increase the value of the property over a five- to seven-year period.”

Horn had worked with SCP founder Gene Zink at Duke Realty for many years. Both were instrumental in securing the Parkwood Crossing acquisition.

“When I left (Duke), I was president of the company, and my role as president was overseeing all the development and leasing and the income side of the business,” Horn said. “Gene and I both had hands in Parkwood. A lot of its development was while we were there.”

Duke Realty developed the Parkwood office park between 1989 and 2005. Horn joined Duke in 1984 after graduating from Indiana University Law School. He left Duke in 2002 to form Horn Properties.

“We’re going to upgrade several buildings in terms of their common areas,” Horn said of Parkwood. “We’re going to build an amenities center, subject to everyone’s approval, that is going to have a fitness center, food service and conference facilities. We’re going to look at ways to enhance our amenity package and to increase the walkability. Things are changing with various types of development and different types of consumer demand.”

Horn said the plan is to build the amenities center in 2017.

“What Parkwood still has is an A location, 96th and Meridian, right off I-465,” Horn said. “It’s accessible to the office employment base of the greater Indianapolis area. We have to make certain investments, and one reason we brought in Rubenstein is because it is willing to make those kinds of investments, because not all office landlords and investors are willing to do that.”

This is one of the largest acquisitions SCP has been involved in, Horn said.

“We felt we had some advantages as far as knowledge of the market and the property,” Horn said.