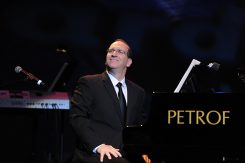 Neil Berg will present “101 Years of Broadway” show Jan. 21 at the Palladium in Carmel. (Submitted photo)

However, when he brings his long-running Broadway concert show to Carmel’s Palladium at 8 p.m. Jan. 21, it will be billed as “101 Years of Broadway.”

“Whenever we come back to a venue, I always add a year,” said Berg, who previously brought his show to the Palladium in October 2013.  “It’s just our way of telling people we’ve been there before. We make sure every place we come back to (the show) is fresh. We change the cast and do different songs, except for a few. We still have our big stars do their big songs.”

Berg said the show has been the No. 1 touring Broadway concert for the last decade, typically featuring five Broadway performers. The first reason, Berg said, all his singers will perform songs from the actual shows they were in. Many of those stars had performed in more than one Broadway show.

“We look at the history of Broadway and have them sing songs they would sing if they were stars from that era,” Berg said. “It’s not just some singer singing some Broadway show tunes.”

Berg serves as musical director, host and plays the piano during the show.

“I basically take people on the journey,” Berg said. “Being a composer and producer myself and (being) friends with many of these show composers, I get to tell some anecdotes of how the show came to be or how the song was written.”

The one performer returning from the previous Palladium appearance is his wife, Rita Harvey, a soprano who starred in “The Phantom of the Opera” and in a revival of “Fiddler on the Roof.”

Danny Zolli, a rock/pop tenor, also will perform at the Palladium. He has starred in more performances of “Jesus Christ Superstar” than anyone else in history, Berg said.

“All the performers do four or five numbers,” Berg said. “We try to make sure it covers a broad spectrum.”