You are at:Home»Current in Fishers»LouVino opens and offers wine, small plates for Fishers area

Chad Coulter felt he could bring something to Fishers in regards to dining and wine that the city didn’t already have. That something would be the third LouVino, a small plates restaurant specializing in wine and bourbon that targets females ages 25 to 55 in the higher income range. 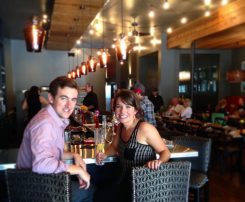 Chad Coulter and his wife Lauren pause inside of LouVino. (Submitted photo)

“I feel that Fishers, from what I heard. was missing that price point,” said Coulter, owner of LouVino. “You have some higher-end places and some fast places, but you don’t have that nice in-between. They do exist but there’s definitely not very many. Fishers is obviously a very up and coming area with IKEA and Topgolf and the whole downtown revitalization. We really wanted to be a part of that. We had that gut feeling when we saw that space.”

The restaurant’s small plates are meant to be shared, with the Brussels sprouts salad and fried chicken tacos at the top of the bestsellers. There are no full entrees on the menu. With wine, the per-person price point for dinner is $30-$35.

LouVino originally opened in Louisville in July 2014, with its second location, also in Louisville, following in July of this year. The Fishers LouVino is the first out-of-state location for the restaurant.

It offers a more local touch, too. The wine flights, six red and six white, are named after famous or well-known people of the city the restaurant moves to. With Fishers near Indianapolis, the restaurant will have Peyton Manning, Axl Rose and Pat McAfee wine flights.

LouVino has already hired 35-40 people from the area for its Fishers location. For more, visit louvino.com/fishers/.