You are at:Home»Current in Carmel»Carmel Community»Bonnett a perfect fit for new post at Booth Tarkington Civic Theatre

The 2009 Carmel High School graduate was named the Booth Tarkington Civic Theatre’s director of development and administration in early November. 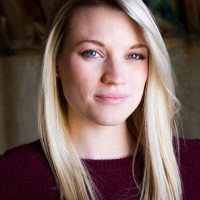 Bonnett, a Carmel resident, graduated in marketing at Indiana University’s Kelley School of Business and minored in music. She interned at the Songbook Academy and was its inaugural youth ambassador in 2009. Bonnett still acts, performing in Beef & Boards’ “Beauty and the Beast” last summer. She started working at Civic in July 2015 as the development officer. She became the development manager and marketing specialist earlier this year.

“What this position does is be responsible for all contributed income for the organization, including fundraising, major gifts, grant writing,” Bonnett said. “I’m also working on the sponsorships and working with our community and corporate relations to basically help Civic become a bigger part of the community and work with those around us. I continue to do some marketing things which I brought from my old job (with Civic). Anything that falls on my desk, that’s what I do.”

While finding time is difficult, Bonnett hopes to continue to perform.

“If time allows, I would love to be able to perform,” Bonnett said. “It’s something that I’m passionate about, and it something that connects me to my job and gives me a different perspective. But this (job) comes first.”

Bonnett appeared as Jo in “Little Women” at Civic Theatre in 2015. She made her Civic debut at age 14 in “Joseph and the Amazing Technicolor Dreamcoat.”

Bonnett will perform in the Songbook Academy All-Stars concert Jan. 7 at the Palladium. In 2012, she served as the intern for the Michael Feinstein Great American Songbook Foundation.

“While serving as Civic’s development officer and marketing specialist, Julia demonstrated a unique ability to relate in a special way to Civic’s many constituencies and to play close attention to financial details, reflecting both her love of theatre and her business training,” stated Civic Chair Board-Elect Don Knebel.