You are at:Home»Current in Westfield»Westfield resident Ricky Raley honored at theChive’s gala

Ricky Raley does his best to help inspire other paralyzed veterans to stay active. 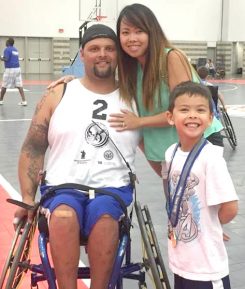 The Westfield resident was honored at theChive’s fourth annual Green Gala in Austin, Texas, which celebrates people helped by the national charity movement. The theCHIVE site is the No. 1 humor website, and Chive Charities, the website’s charity-focused program, has raised more than $7.5 million for those in need across the U.S. through a network of fans devoted to helping others.

The Boot Campaign partnered with Mike’s Hard Lemonade for a Backyard Refresh campaign for veterans, and Raley was selected. Chive Charities wanted to do their part, so they added to a backyard renovation at Raley’s house to give him a therapy swim/spa where he could do his physical therapy as well as train for a triathlon. For Raley, swimming is the hardest part and it is difficult for him to practice in a public pool.

While on an Iraq tour of duty in 2008 for the U.S. Army National Guard, he suffered a traumatic brain injury from an improved explosion device. Raley received a purple heart. Five months after returning home, Raley was involved in an auto accident in 2009 that left him paralyzed from the waist down.

Raley works as the sports director for Kentucky-Indiana chapter of Paralyzed Veterans of America. Earlier this month, he helped veterans have an adaptive hunting experience.

“We have veterans who have challenges being in a wheelchair or other spinal cord diseases not being able to be a hunter like they used to,” Raley said. “I don’t have to have special equipment for hunting. I’m able to put back my bow and shoot. We have shooting rigs that are ways for quadriplegics to shoot because they can’t use their hands.”

Raley also helps with PVA golf tournament. Raley uses an adaptive golf chair that stands you up so he can take a full swing.

Raley has been active with wheelchair basketball and races with a handcycle, racing in an Army Ten-miler in Washington, D.C., in October.