Dee Timi is eager to be making her directorial debut at Carmel Community Players. 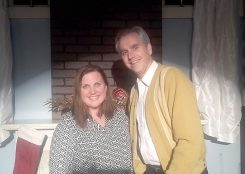 Timi had helped with CCP the past couple of years in a volunteer capacity. Timi, who moved to Westfield three years ago, had been active in community theater in Joplin, Mo.

“I wanted to be on the list to be a director and submitted a couple of options,” she said. “They asked if I would do the Christmas show and I said, ‘Heck, yeah, that will get me in the door.’ To be given the chance to direct here, I’m tickled to death.”

Timi said the comedy, written by Pat Cook, is told through flashbacks. Connor Murphy recalls how he wanted a go-kart for Christmas.

“The kids are amazing,” Timi said of the cast. “They are so incredibly perfect for the parts. It’s truly inspiring and fun. It’s a great family show, so anybody can come. It’s a wonderful cast.”

Courtnie Janikowski, who recently moved to Carmel, is serving as the stage manager.

“Courtnie had been active in community theatre and college plays and she let Carmel Community Players know she’d like to get involved, so I called her,” Timi said. “She is fabulous and right on top of everything.”