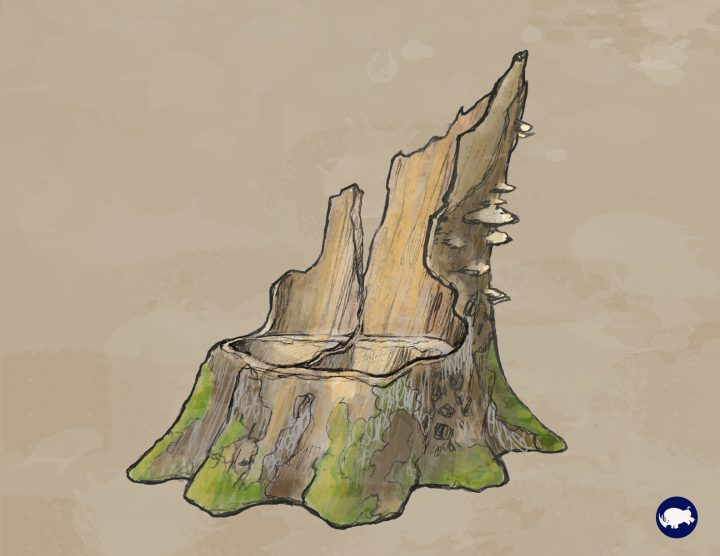 The new turtle exhibit will be designed to look like a tree stump. (Submitted photo)

They say that slow and steady wins the race.

In this case, a faster-than-expected and steady-fundraising drive has nearly raised enough money for a new Zion Nature Center turtle exhibit in a little more than a year.

“We have received great community support that came through multiple donations: our 2015 rummage sale, anonymous donations at the Nature Center, gifts in memorial, Tri Kappa of Zionsville, truly the list goes on and on,” Zion Nature Center Manager Mindy Murdock said.

Murdock said the Union Elementary first-grade students held a Coffee for a Cause fundraiser in 2015, which brought in more than $800.

“So many individuals and families have supported our exhibit fund throughout the year,” Murdock said. “In addition, our Friends of Zion Nature Center group gave $5,500 to help us reach our final goal.”

Murdock said there was never a set deadline to raise the $9,500, but she is pleased to have raised just shy of $9,300 already. Donations are still being accepted.

“This (is) the first big project and exhibit that we’ve ever asked for donations on,” Murdock said. “We’ve received smaller grants over the years for exhibits and materials, but we didn’t know what to expect with our first professionally designed product.”

The exhibit, a 5-foot diameter hollowed-out tree stump, is in the design and planning stages with Minnesota-based Blue Rhino Studio. It will house eastern box turtles. Murdock said the stump will be designed to be realistic, with insect tunnels, woodpecker holes, fungus and more. It will be the first piece of what she said she hopes will become a realistic forest habitat within the Nature Center.

“Even though the (new) Nature Center (building) project will take longer than we had hoped, we are still looking for a spring completion date for the new exhibit and hope to hold an open house at the current Zion Nature Center to mark its arrival,” Murdock said. “The exhibit is being constructed in a way that when the new facility is completed we will be able to break the exhibit apart and move it to its new location.

She said they have started brainstorming about future exhibits to coordinate with the turtle exhibit.

“Unfortunately those various pieces and exhibits will have to wait until we are able to move into the larger space,” she said. “I hope that the community’s support and enthusiasm makes their future construction a possibility as well.”