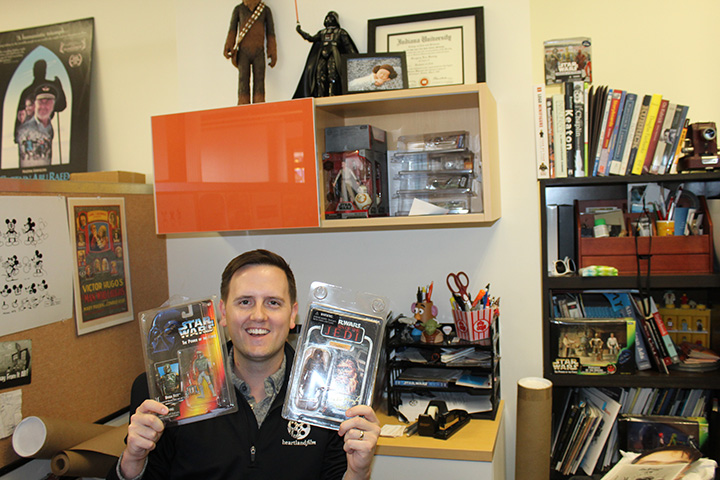 Greg Sorvig collects movie memorabilia, some of which can be found in his Heartland Film Festival office. (Photo by Amy Pauszek)
 

Greg Sorvig of Carmel is working to make the 25th annual Heartland Film Festival a success.

Greg Sorvig moved numerous times growing up, but that has provided one advantage.

Although some guess he had a father in the military, his father actually was in retail business. Sorvig, who has lived in 10 different states, attended three different high schools in Alabama, Connecticut and Indiana.

“Tom Cruise said that (attending 15 schools in 14 years) is how he became a people person, because you meet so many different strangers,” Sorvig said.

Being a people person serves the new Carmel resident well in his position as the director of programming and marketing for Heartland Film Festival, which will be held Oct. 20 to 30 in Indianapolis.  Sorvig, 32, has been working for Heartland full time for 4 1/2 years and previously was a volunteer as a movie screener. Recently, he took over programming for the festival.

“A lot of people who get jobs at Heartland have been volunteers or have a passion for film,” Sorvig said. “I jokingly tell people I took a full-time job so I could stop watching bad movies.”

As a volunteer screener, Sorvig said films come in from all over the world, and the volunteers are the first to see the lesser-known films.

“Then Heartland’s marketing person quit, and I took over,” Sorvig said.  “There was really a lot of spending that didn’t need to be done. I took over a lot of things in-house from graphic design to public relations and communications. In the five years I’ve been there, we’ve had three of the top attended years. That’s really neat. Being a nonprofit, you are a jack of all trades in your areas, too. Coming from that background of critiquing and watching movies, I was able to jump in where there were holes.”

So when the artistic director stepped down earlier this year, Sorvig was asked if he was interested in programming.

Sorvig said Heartland’s mission is to find films that inspire or have a powerful message. Heartland, celebrating its 25th anniversary, will feature 138 films from 29 countries this month. Sorvig said it’s usually in the 120 to 140 range.

“Everything is very purposeful,” he said. “There are crazy spread sheets with scores. It’s really the director of programming’s role to look at the rankings (committee screeners), fit it with the mission and say, ‘Maybe these 15 films in each category will go on to a finalist jury.’”

The finalists jury is made up of filmmakers, past winners, critics and academia.

Sorvig said unlike many other film festivals, Heartland labels out how it picks its winners.

Through the many moves and different jobs, one constant throughout Sorvig’s life has been his love of movies.

Appropriately, Sorvig interned at Disney World during college and worked on “The Great Movie Ride,” a 22-minute ride through movie history.

“So I was there with animatronic James Cagney, Gene Kelly and John Wayne,” Sorvig said. “That’s fantastic for public speaking and you get that great professional foundation of working with Disney. I took some fantastic Disney-run courses.”

Personal: Born in Grand Forks, N.D. Married Rachel (Ziemba) Sorvig in 2008. The two met after Sorvig transferred to Avon High School during his senior year. They went to prom and have been together ever since. Both attended Indiana University. Sorvig majored in communications and culture with emphasis on film studies. They have a daughter, Leona, who will turn 1 year old Oct. 27. After graduating from IU, Sorvig took a job at Hunt Construction, which built Lucas Oil Stadium, as a graphic designer. He then worked on marketing for a nonprofit, National Precast Concrete Association, in Carmel. He then worked for Shiel Sexton, another construction company.

Favorite genre: “Comedy. There are movies I can watch over and over. I have an affinity for ‘The Jerk’ with Steve Martin and ‘Dumb and Dumber’ with Jim Carrey. Especially ‘Dumb and Dumber’ developed my warped sense of humor over the years.” As a film student, Sorvig developed a love of silent film comedy masters Buster Keaton, Harold Lloyd and Charlie Chaplin.

Favorite Heartland film: “Becoming Bulletproof,” a documentary which focuses on Zeno Mountain Farms, where actors with and without disabilities come each year to make original short films.

Hobby: “I’m a huge ‘Star Wars’ nerd,” Sorvig admitted. “I’ve been collecting “Star Wars’ toys since I was little. I have a whole set of the original figures in perfect condition out of the package. It may go to my daughter’s college fund, we’ll see.”

Favorite movie: “I love ‘Raiders of the Lost Ark.’ I think it’s a move that you can watch over and over.”

Awards party: 7 to 10:30 p.m. Oct. 29 in the Premiere Pavilion. Attend the party that will celebrate the films and filmmakers of the festival. All 2016 winners will be named during this event. Tickets are $20.