You are at:Home»Current in Zionsville»Clear Software running out of space at zWORKS 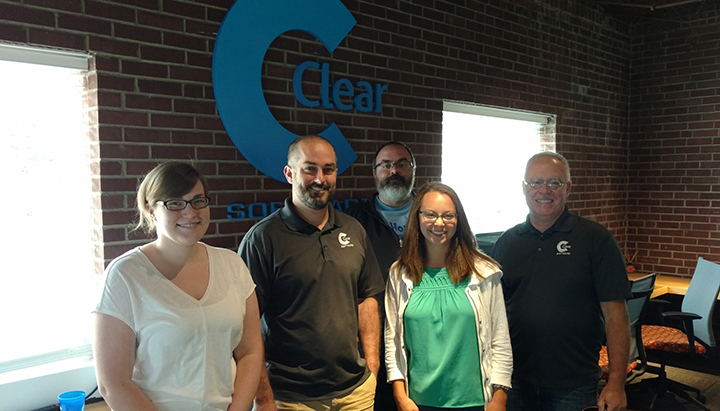 The Zionsville-based company began occupying zWORKS co-working space with three employees more than a year ago, but that has recently increased to 12.

“It was getting to the point where we had everybody out there,” CEO Jon Gilman said, gesturing to the front of the zWORKS building. “We were starting to occupy too much of the space.”

They were able to utilize a dedicated rear room of the building for their increased staff but have been looking for a new location.

“We have a few more months before it gets uncomfortable in here,” Gilman said.

“We’re committed to being local,” Vice President of Marketing Marty Thompson said, but they’ve discovered a challenge of finding the right location for expansion.

“There’s not a lot of options in town for graduation spaces,” Gilman said. “Where you need to have potentially 40 to 50 seats available.”

Gilman expects the staff grow to 20 by the end of this year and has been approved to receive approximately $2.5 million in tax incentives from the state to add up to 300 jobs in the next 10 years. While many of his staff members are on sales teams dispersed across the country, he anticipates they’ll reach a few hundred within the next few years.

Clear Software uses a cloud platform to make business software intuitive and easy to use. Clients include a handful of fortune 500 companies.

Gilman said he is considering doing a series A round to raise money for capital investments. He said he’ll make that decision in the fall, but is determining whether they need it. By September, he said he expects to be back in the black “and pretty self-sufficient, but if you really want to scale, you’ve got to hire more people,” he said.