You are at:Home»Current in Westfield»Girls in Troop 960 earn silver award with bocce ball court 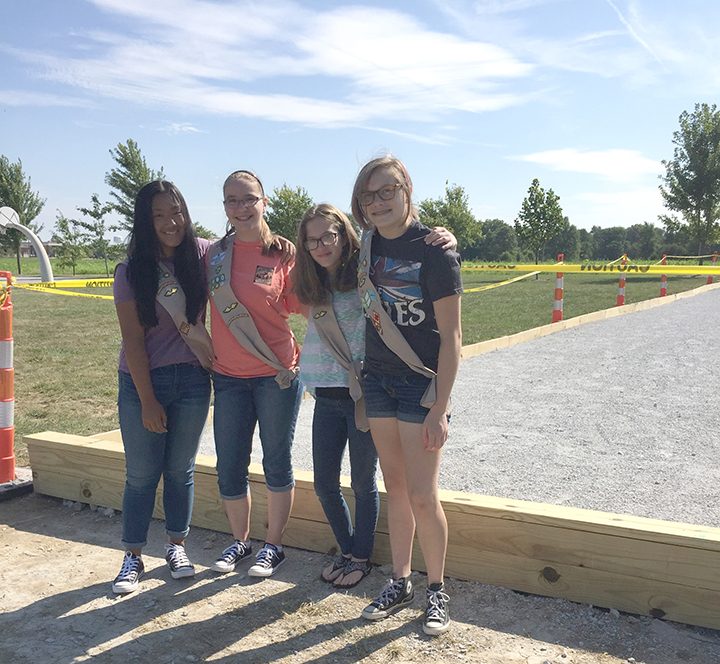 Four of the 11 girls in Girl Scout Troop 960 worked together to earn their silver awards, the second-highest award achieved in Girl Scouts.

The silver award is given to girls who work alone or with a troop that showcases leadership with the improvement of a community. Madigan Hester, Sierra Cain, Erin Byers and Stephanie von Bulow, all 13-years old, worked together to build a bocce ball court in Quaker Park, 17501 Dartown Rd.

To fundraise for the project, the girls face-painted at Cool Creek Park during its summer concerts and worked with Chili’s Bar and Grill on various fundraisers while selling the restaurant’s chips and salsa.

The court is almost finished and will soon be open to the public.

“We are planning on putting out a few sets of bocce balls with the bocce court so people don’t have to bring their own,” Cain said. “We are all really into sports, so we definitely wanted to do something around that topic.”

The bocce court is the first Scout project to take place in Quaker Park, according to Joanne Hester, the troop leader.

Three Boy Scout dads assisted the girls with the construction of the court.

“I think it amazed the girls how physically taxing it was, but they did not stop, not even in 90-degree weather,” Hester said.

Carter Lumber and Kim’s Trucking donated wood and stone and provided a discount. The girls raised $1,600 with their fundraisers and also asked local businesses for donations. Those that donated will be listed on a plaque near the court.

The girls are still looking for donations to complete the project. Those interested can email Joanne Hester at the_hesters@comcast.net.