You are at:Home»Current in Fishers»Fishers’ Caldwells celebrating 70 years 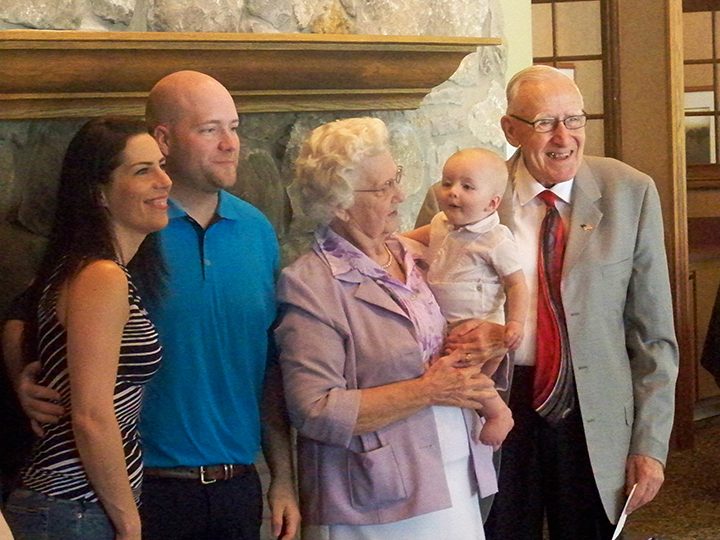 Fishers residents Wayne, right, and Joan Caldwell, center, celebrated their 70th wedding anniversary with a family reunion that included the dedication of their seventh great-grandchild, Isaac Rickey, the son of their grandson Jeffrey and Amber Rickey. (Photos by Sam Elliott)

Fishers residents for nearly 30 years, Wayne and Joan Caldwell marked 70 years of marriage this summer with a celebration that included a family reunion hosted at Conner Prairie. 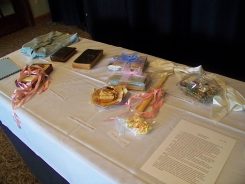 Sentimental souvenirs from 70 years of marriage and beforehand on display at the Caldwells’ 70th anniversary celebration included Joan’s wedding dress, Wayne and Joan’s first Bibles, collections of love letters and even a piece of cake saved from their 1946 wedding.

More than 30 family members and four generations were on hand for the celebration, which also included Wayne — a longtime pastor and missionary to more than 30 countries with the Wesleyan Church — dedicating he and Joan’s seventh great-grandchild.

“That was a dramatic turn in my life,” Wayne said of his time in the war. “I was not a Christian when I went overseas, but my mother gave me a little Bible and said, ‘Put this in your pocket and read it when you get overseas,’ but I hadn’t read it.”

Wayne was driven to begin reading that Bible following a training accident involving a plane he had been on, but bumped off of, moments before takeoff. Upon returning from the war, he served as a minister in Kansas, Colorado and Missouri — as well as a missionary to more than 30 countries on six continents — before he and Joan moved to Indiana in 1972, and then Fishers in 1987, when Wayne joined the faculty at Indiana Wesleyan University.

“The glue that has held us together more than anything else and to love each other these 70 years is both of us grew up in homes with families where after breakfast our parents got on their knees after reading the Bible and prayed,” Wayne said. “We carried that on from the day we were married.”