You are at:Home»Night & Day»Entertainment News»School of Rock to present Rock the Lot, Battle of the Bands Aug. 12-13 in Carmel and Fishers 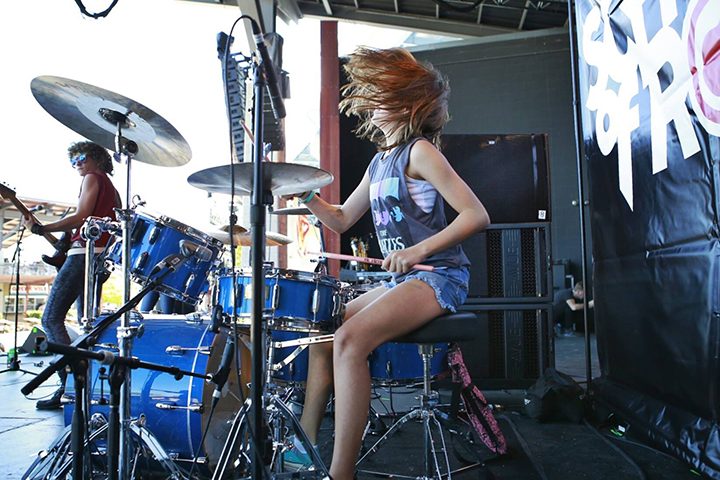 A School of Rock student plays the drums. (Submitted photo)

Jack Black won’t make an appearance, but the students will still be ready to rock. School of Rock will be hosting its fourth annual Rock the Lot outdoor concert in conjunction with the group’s first-ever Battle of the Bands competition.

“It’s really difficult for student musicians to find venues to play in,” said Elyse Causey, general manager at School of Rock Fishers. “We wanted to give them an outlet to really show off some of the talent.”

School of Rock is a performance-based music lesson program for people of all ages. Students have one solo session each week as well as a group rehearsal, all in preparation for a preview show and three final performances. Causey said giving students something to work toward is part of the draw of the program.

“It gets the kids engaged right away in actually getting to use what they’re learning and getting to show it off on stage,” she said.

Battle of the Bands will feature 10 18-and-under bands with some School of Rock students as well as other indie groups. The winner of the competition will win recording time at Azmyth Recording Studio in Indianapolis along with other prizes.

On Saturday, all School of Rock students will perform at the Rock the Lot concert, which serves as a preview show. Each performance will have a different theme including the Rolling Stones, a tribute to David Bowie and Glam Rock, Lollapalooza, albums of 1991, 1970s guitar rock and all things Ozzie and Black Sabbath.

“I hope a lot of people can come to not only support local music, but music from the next generation of really talented musicians,” Causey said.