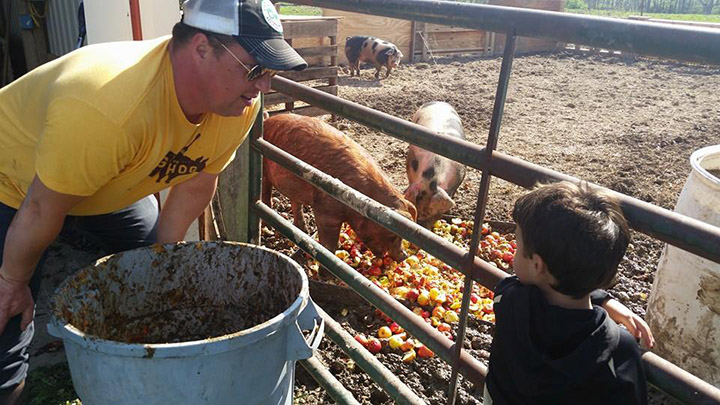 Matt Hayden feeds the hogs on his property in Fishers. (Submitted photo)

Matt Hayden always wanted to raise his kids on a farm but he didn’t know if it would be possible in Hamilton County — his new home since 2013.

Three years ago, Hayden and his wife Natalie sent their second son to college and decided it was time to leave California and move to Indiana to raise their two youngest children. His wife, a yoga instructor, opened Body Mind & Core in Carmel on Range Line Road.

Hayden loves the yoga studio and the schools in Hamilton County, but now he feels like his move is complete. In November, the couple purchased 10 acres of farmland in Fishers at E. 136th Street and Cyntheanne Road. Hayden, who grew up baling hay and showing pigs on a Southern Indiana farm, is now raising hogs at Hayden Family Farms.

“It’s a dream come true,” he said. “We wanted to return our children to this upbringing, this way of life…And now we’re selling our products and really engaged in the community.”

They moved into the farm in May and Hayden  is now raising a special kind of hog that is unique, not only to Indiana, but nationwide. He’s imported Mangalitsa pigs, a wooly Hungarian breed of pig known for their high-quality fat content. The fat on these pigs is so flavorful — and healthier when it comes to fatty acids — that they are sought after for the production of charcuterie meats and sausages.

This small-scale family-run farm has begun to sell its pigs to The Pig’s Tale, a local charcuterie company started by professional cooks George Turkette, and Troy Reed.

Gathering around the table

Hayden Family Farms began putting on monthly farmstead dinners called “The Table” on the second Sunday of each month, featuring local chefs using Hayden’s hogs in every dish of the special meal with Reed and Turkette handle charcuterie. Peace Water Winery in Carmel partnered with Hayden for the June and July events and Sun King Brewery will pair beers at the next event on Aug. 14 at 4:30 p.m. Tickets cost $85 and the last two dinners sold out, which featured Valerie Vanderpool from Girlie Gourmet and Spoke & Steele chef Tyson Peterson. Tulip Tree Creamery in Indianapolis, which purchases its milk from Lot Hill Dairy Farm, Seymour, Ind., is also a partner for these events.

Tickets can be purchased through Hayden Family Farms’ Facebook page.

Attendees get to taste dishes made with items from Hayden’s farm. In addition to pigs, which Hayden raises nearly on his own with occasional help from his 4-year-old son Thomas, the farm also produces eggs, herbs, tomatoes, potatoes, onions, carrots, cucumbers and more.

Dinner guests also get to see the hogs themselves and Hayden loves to talk about the years of work that went into finding just the right pig to produce his cuts of meat. His journey actually led him to cross breed three different types of pigs to create the best product.

When Hayden first imported Mangalitsa pigs, he consulted with local friends, including Joe Lazzarra, of Joe’s Butcher Shop in Carmel, and Craig Baker, of The Local and Plow and Anchor, restaurants in Westfield in Indianapolis. They both said they love the taste, but economically these pigs don’t make a lot of sense for a small market like Indiana because there’s not enough protein on the carcass of the pig.

“I decided I needed to change the fat to protein ratio so I began to cross breed the pigs to make it viable economically,” Hayden said.

He worked with agriculture professors at Purdue University to cross breed Mangalitsa pigs with perkshire pigs to add protein to the body. But those pigs had small snouts which mean they couldn’t forage very well and eat from a pasture, which is important for the proper pig’s diet and growth. So Hayden also cross bred in some gloucestershire spotted pig for the snout.

Once the pigs are grown, Hayden switches the animals to a special diet of pulverized apples from Tuttle Orchards and spent barley from local breweries such as Danny Boy, Sun King and Four Day Ray.

“The cross breeding combined with our diet creates a pig that truly delivers a high quality flavor,” he said.

Hayden said future dinners are planned every month until October and he’s been selling some pork chops and other cuts at the Carmel Farmers Market on Saturdays. Reed and Turkette are planning events on Aug. 20 and Oct. 14 at Hayden Family Farms that teaches people how to butcher a whole hog through a hands-on a approach. Hayden has even connected to local 4-H clubs in Hamilton County and he’s taught some agriculture courses at Hamilton Southeastern High School.

Currently, Hayden Family Farms has 50 hogs but he expects litters of about 10 every month. Hayden said he’s happy but surprised by the immediate growth of the farm.